Thoughts on how to reinforce table legs so the assembly will not rack. November 25, 2008

Question
My client sent me this photo to base a design for a dining table. The table top and legs will be made from reclaimed ash 2" thick. The dimensions of the top are 40"W x 72"L. The legs are approximately 30"W x 28"H. The appeal to the client is that the table appears to have no visible stretchers or skirts. I've never built a table with this style leg or without some sort of stretchers. Won't there be a problem with racking. If not, how would you suggest attaching the legs? 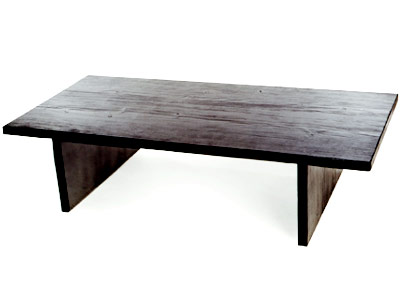 Forum Responses
(Furniture Making Forum)
From contributor P:
Sliding dovetails would be my only thought but I don't see how they would work. I think you're right.


From contributor J:
Mortise and tenon joints are strong, but I would put some reinforcement blocking nest to the legs, set in from the edge of the top. Do not let customers talk you into how to build things - they are always wrong - they know nothing of furniture construction, otherwise they would build it themselves.

From contributor W:
I did a table similar to that in the photo. What was done was to put three 3 inch tall x 2 inch wide stretchers through-mortised into the legs right at the bottom of the top. The position of the outside stretchers was such they weren't seen from a standing person less than 5 feet from the table. To help further would be to ebonize the stretchers.

The central stretcher was where the top was screwed to the base. There were three massive (1 1/4" w x 4" l x 1 1/4" h) blind tenons on each leg with the central one glued and the side ones in longer mortises for expansion.


From contributor D:
This top appears to just sit on nice simple slabs of wood. Appear being the operative word. Three pieces of wood to make the table is all anyone can see in the photo provided. That does not mean there are no stretchers or additional blocking set well inside the edges that tie the two vertical panels together.

The picture suggests simplicity; as a maker, you see more complexity is required, and that is fine. Without being deceptive or dwelling on it too much, let them know that things aren't always as simple as they appear, and that you will make this work without compromising the appearance. They approve the aesthetics, you provide the mechanics.

It's all about surface in joints, so multiple stub tenons along the top edge of the verticals will get you enough glue surface if they use it lightly, and move it very carefully (like a Nakashima slab). If they are regular folks, add 3-4 stretchers at 3-1/2" wide down the center of the table that tenon into the verticals. This will also allow you to float the top and make it easier to move, refinish, etc.

I have always said that if people are on the floor where they can see such things, they should be occupied doing something other than looking at the furniture.


From contributor P:
What if you put a bit of a curve to the legs? Reckon that would firm things up?

From contributor A:
I would have four T shaped plates welded up from 1/2" plate steel. The plates would be epoxied into a mortise in the top of the leg, and you'd route a recess for them in the underside of the top. Be sure to drill elongated holes in the flange that gets screwed to the top for expansion. This will give you a lot of resistance to the racking - just don't drag the table. Better yet is adding two low profile rails. This photo is a table I did similar in concept, with 2" rails set far enough in that they are barely visible, unless you are under the dinner table doing "other things." There was no racking (of the table) at all. Good luck! 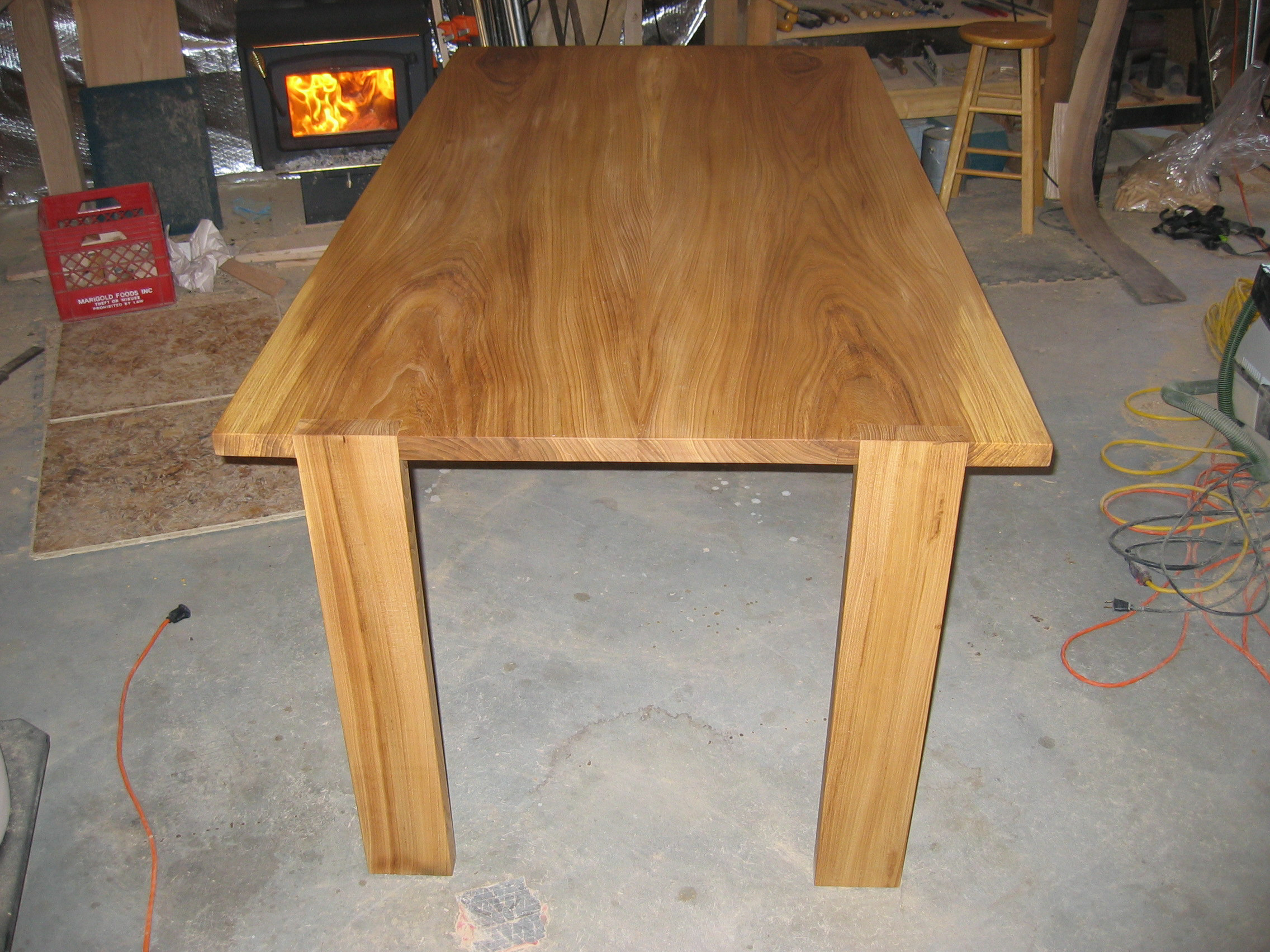 
From contributor B:
Similar to the units in the previous post, how about supporting the legs with some of those floating shelf support brackets? They have a plate that bolts to the wall and a perpendicular rod that supports the shelf. You wouldn't see them unless you were under the table.

From contributor M:
Something to remember is that just because it doesn't rack the day you deliver it doesn't mean it won't. What happens over time? After the customer moves it to wax floors stand on it to change a light bulb etc , will it stand up?

From contributor K:
It will only rack if you touch it. Similar to contributor P's suggestion; the "legs" could form a slight "v" along their length. Mortise into top, and set at a slight flare. I've seen a craftsman-style bench built in this manner. Sorry, I don't remember who designed it.

From contributor D:
If you charge $9,000 or under, it won't last unless you beef up joinery at any 90 degree corner. Common, everyday furniture is abused enough to where it needs to be durable. If you charge $9,000 or more, then it will not rack since they will be afraid to move it or stand on it, or scoot it around. It will be too precious to touch.

Looking back, the best solution would be a combination of some joinery in the center of the table, joining the two legs to a pair of center stretchers, and then curving the two legs. The curve will self-support, and then the table can be moved at will, with no adverse effects.


From contributor W:
I now remember seeing a table like this before. The answer was the legs were mortised into the top. To stiffen the legs from racking were two hand-forged angle braces (one for each leg) creating a 45-45-90 triangle. As I recall, each was about 12-14 inches long, made from square (1/2 - 3/4inches) iron stock and twisted to add interest when they were seen. They were attached to the top with a forged screw and to the legs they were driven into a bore slightly less than the thickness of the bar. Nothing was done to hide the bars just that they were in the middle of the table.

I would go even one step further and have the iron stretcher made as a curve from one leg to the other and attached to the top in the middle of the table. I like to juxtapose wood against iron, curves against squares, rough against polished.


From contributor M:
Steel reinforcement is a great idea. A welded face frame would be interesting, as the edges of the top and the edges of the legs are on the same plane. If all of the pieces have approximately 2" of thickness, legs mortised, and the steel (1/4" thickness) is securely fastened, and it looks good.