Advice on finding out the cause of a wrinkled topcoat. April 18, 2015

Question
We are using ML Campbell claw lock and tinted resistant conversion varnish through a CA Tech hvlp gun. We are getting really bad lifting on the conversion varnish. The weird thing is it is only on soft maple and not poplar or maple ply. Does anyone have any ideas? 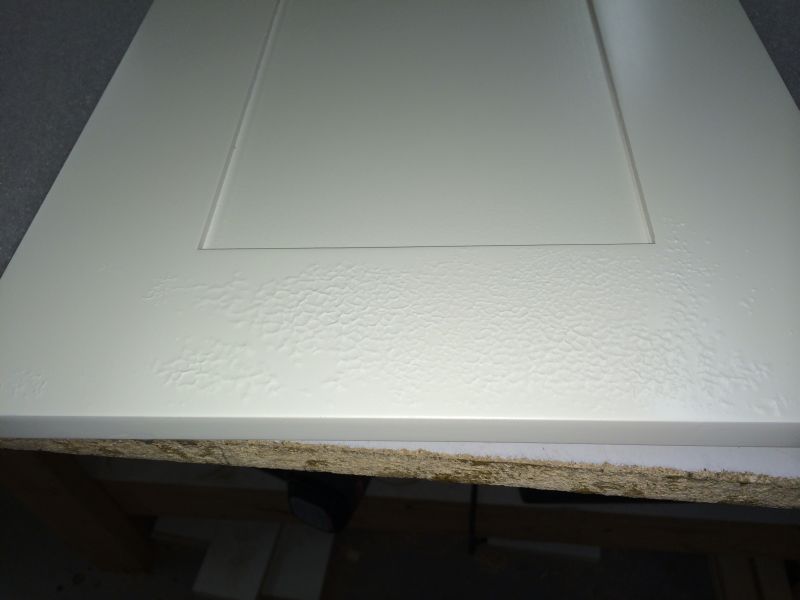 Forum Responses
(Finishing Forum)
From Contributor S:
It's good that you posted a picture of the problem because this is not lifting, this is wrinkling. You've introduced a recoat window. Recoat windows can happen from many different causes. A possibility is that you are not using the recommended lacquer thinner and instead you're using someone else's brand and that this other thinner that you're using is too "hot" (its solvency is too potent for your finishes). That's just a shot in the dark. Post details of your finish schedule. Is this happening over the Clawlock or over the first coat of Resistant that's over the Clawlock? Grind down to smooth and lay down a thin coat of vinyl sealer and then a new coat of Resistant. Use only MLC's lacquer thinners.


From the original questioner:
The resistance is doing this over the claw lock but it isn't doing it on any other species? At home I use Mohawk with their vinyl sealer and don't have these problems. The thinner is what the distributor sells not sure of the brand. One rep called back and said the claw lock might be to heavy

From Contributor S:
Your total dry mil thickness has to be 4-5 dry mils. The Clawlock should be less than a mil. The thinner has to only be MLC thinner, as I outlined about solvency and recoat windows. Your substrate isn't the cause, but it adds to the intrigue of the problem. The question that anyone ought to be asking, particularly your finisher, is what caused the finish to wrinkle? If you want to understand the wrinkling problem, an undercoat starts to set up, to crosslink. The topcoat has solvents in it that want to react chemically with the coating underneath and now you have a situation of a chemical tug-o-war. That's what you see with a wrinkle in the finish. The tech sheet for Resistant is pretty specific. Only use MLC reducers and additives. They're formulated with the solvencies that work.

From contributor C:
Notice how it's on the outside frame of the door? It's too much paint (heavy from hitting the edges) too soon. The primer isn't fully hard and the heavy coat is eating into the non-cross linked primer. Use less primer or more time and less top coat on those areas.

From the original questioner:
We talked to the ML rep he said the maple might need to have a thinner claw lock coat on maple. The finisher puts just as much on other species and no problem.

From Contributor S:
The substrate has nothing to do with your wrinkled finish. You finish schedule has everything to do with it, and absent you posting your finish schedule then everything is conjecture. In general, because that's all we have, the couple of guidelines and suggestions posted here are probably all that your finisher needs to lay down a finish that won't wrinkle. I don't know your reluctance to post specific details of the finish. I don't know what you’re aiming to accomplish here outside of maybe confirming a suspicion you have, that your substrate is part of the problem, which it's not. Your problem is the application of your finish materials. Mix and spray according to well-defined guidelines and your coatings will behave on your myriad of substrate surfaces.

From contributor J:
Just a guess, but did your finisher forget to sand completely the entire door? Maybe he just skipped that specific area, or could he have sanded through the Clawlock? I have sprayed countless times with Clawlock and cannot remember ever seeing that happen to any piece of wood.

From contributor S:
It looks like a solvent pop. What was the temp when you sprayed it? It was probably a little heavy as the top flashed but the solvent was still trying to escape and caused all the ripples. Other times the top explodes and you end up with a zillion air bubbles.

From contributor O:
What grit sandpaper are you whitewood sanding the maple with?

From the original questioner:
We use 150# but on the last batch of maple we used 120#. The rep mentioned that the smooth nature of the maple may not let thicker coats of Clawlock "bite". So we used thinner coats of Clawlock and so far no problem. We 150# the poplar and sprayed heavier coats and still doesn’t wrinkle.

From Contributor S:
Your rep is barking up a tree. Whitewood sanding with 150 grit is plenty of grit for Clawlock to "bite". Does he mean "to adhere"? If you aren't burnishing the wood fibers (by using worn out sandpaper) then there's plenty of tooth with 150 grit - even with 180 grit for the Clawlock to bite (actually, the proper phrase is "to adhere"). Your problem isn't one of the finish adhering to the substrate and it’s not one of inter-coat adhesion. Your problem is your coating is wrinkling in some spots. Why one wood and not another? Introduce this step into your finish schedule, before applying your first coat of Clawlock wipe the woods (all of them) with a rag soaked in acetone. Why? One likely culprit is that the wood itself might have polar irregularities. Aceone, being a polar solvent, will kind of even these irregularities (if they are there).

This alone isn't good enough. I spelled out that if you don't want to take risks in your finishing that you have to use the MLC lacquer thinner and not someone else's lacquer thinner. Recoat windows (wrinkling) can have any number of causes and there are any number of variables, some you can't control. If you look closely at your finish schedule you just might pinpoint the variabl3es that you can control. I make plenty of spraying mistakes and the rule in the world of applied coatings by us "so-called" professionals is that the overwhelming majority of finish defects are operator-caused. Did your rep visit your shop with a device to read the dry mil thickness of your finish? That's an obvious step in troubleshooting.


From contributor M:
How long did it take after spraying did it start to wrinkle?

From the original questioner:
I am not totally sure – I think less than one hour.

From contributor T:
I've sprayed Clawlock on everything from poplar to soft and hard maple, to leftover cherry offcuts and Lord only knows what else, and this has never happened to anything I've sprayed with it. I only say this because Contributor S is right, soft maple isn't the problem unless your lumber is perhaps contaminated with something (shot in the dark there). The wrinkled finish you posted is exactly what happens if you have undercatalyzed primer (or, uncatalyzed primer). If you have a spare slab of maple plywood, hose it with uncatalyzed primer, let it fume off for an hour and topcoat it with whatever color Resistant you have in the hopper. I bet you'll get this same effect in some way or the other. Do not buy that soft maple needs to be treated any differently than hard maple when being painted. If anything, it's the other way around, as the soft maple will be more easily abraded by sandpaper.