Mixing products from different manufacturers and spray-applying to a highly profiled surface could be contributing to this problem. July 11, 2013

Question
What could have gone wrong? I made a test on scrap and it came out nice, but now that I gave it to my worker, it didn't come out right.

I used a Spanish cedar because it's soft for carving, but I wanted to give the color of walnut. On bare wood I sanded to 220. I applied two coats of Fast Drying Sanding Sealer from Sherwin Williams Wood Classics. I sanded between coats, then applied a coat of glaze, mixing equal parts of General Finish gel stain Candelite, Java, and Special Walnut from Minwax. Later I decided to clean it off with lacquer retarder because my worker didn't do it right, leaving a lot of brush marks. I decided to use a toner to get the walnut color, so I used Zinsser seal coat shellac diluted with two parts of denatured alcohol and one part shellac with Golden Brown Transtint dye. I made him an example and it came out nice, but the pieces he did were uneven in color with 3 layers of toner, but I believe he didn't let it dry between coats. 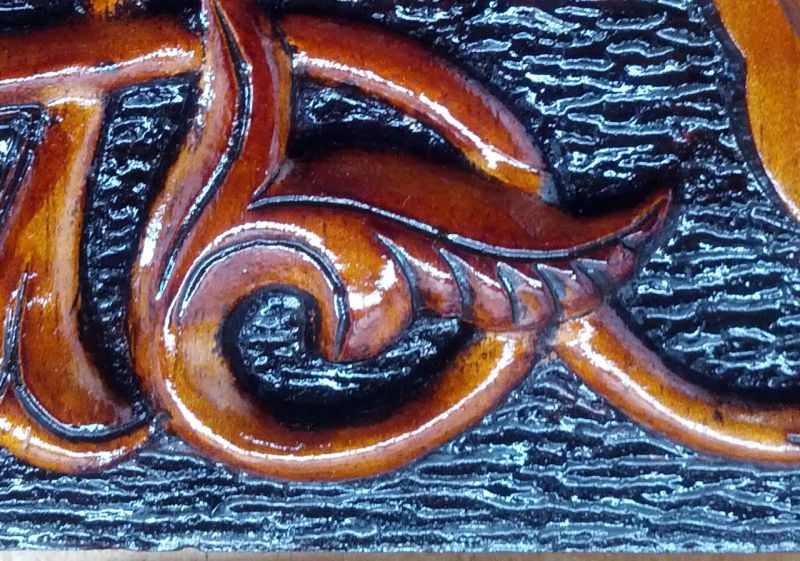 Forum Responses
(Finishing Forum)
From contributor E:
Don't know if it caused your problem, but you're mixing finishes from a variety of manufacturers. Pick one and stay with it through the process. It makes figuring things out a lot easier.


From contributor D:
If I had to guess I would say it was applicator error. If you did it and got results then you know what the process is. I would stand there and watch him do it and see what he is doing different than you are and correct his procedures. I also agree with sticking to one line of products. GF has everything you need to get that look.

From contributor B:
In addition to what's already been said, you're not spraying toner onto a flat surface. It appears that your worker is only spraying from one direction, even though he's making 3 passes. Based on the photo, it looks like he's spraying only from the upper left.

From contributor T:
So where are we on the project? Still making samples, or is everything to this point? If you are still making samples, I would recommend using the dye (reduced) directly on the wood to get a head start on the color. Can it be introduced into a wiping stain base? I don't have much experience in most of the products you mentioned, but what I am seeing is the more pronounced areas catching the Transtint, and they will only get darker as you try to hit the more recessed areas. If everything is at this point, can the dye be intermixed with your raw glaze base? If so, I would get an artist brush and try to fill in color on the lighter spots, and try to stay away from adding any more color to the darker spots. Then re-apply clear coat.

From the original questioner:
Thanks. I was thinking with the use of shellac in the toner there wouldn't be a problem of using different products. The problem is happening in the carving areas because I have some flat areas. This picture is not a sample - this is the project. There are 30 panels for cabinet doors. I still have 30 more panels to go and they already have sanding sealer, but I want to avoid the same problem. I could do the glaze with the brush but I changed the glaze for toner to make it easier for my helper because I don't have time to do it all by myself. I'm using HVLP Fuji system. You think he's spraying with too much pressure or the shellac is too thin? What proportion would be okay for the shellac for toner?

From contributor J:
The photo leads me to think that the toner coat was too wet and flowed to the downhill areas, making them darker. Thinned material sprayed wet will be more prone to that - more solvent to flash, more time to flow. Try pulling the gun further back from the surface, use a smaller air cap if you have it, and think "mist." It may take several lighter coats to get the color.

From contributor M:
I think you would be better off applying some kind of a glazing medium by hand with an artist's brush. The carved details are going to be very challenging to tone via spray application as they will create turbulent airflow. That could also be a partial explanation for what's going on. I also have to second that it is strongly advisable to simplify your finishing schedule and use products that are approved for use with one another.