Taking a look at some reclaimed timbers, and trying to estimate their worth. March 28, 2010

Question
Someone contacted me about some beams he has in storage. They are 8"x8" and 8"x10" up to 32' long. He wants them out of the way and wants to trade the beams for some of the lumber milled from them and also for some other types of wood from our stock. The first thing I need to know is the worth of the beams. He claims they are douglas fir. That specie is not native to our area and I haven't worked with it before so I can't id it. I know the old railroad buildings they came from and know them to be over 100 years old. I'm speculating that it's possible the railroad ate the shipping cost to the midwest simply because they could.

He gave us a sample 8x8 beam to saw up. The exposed growth rings were flaking off and they appeared like layers of pastry. The smell of it when freshly sawn reminded me of some churchy place I was at when I was a kid. I inspected the 1x6's that ware sawn from an 8x8 and they all appeared quarter and rift with tight growth rings. Here's a sample: 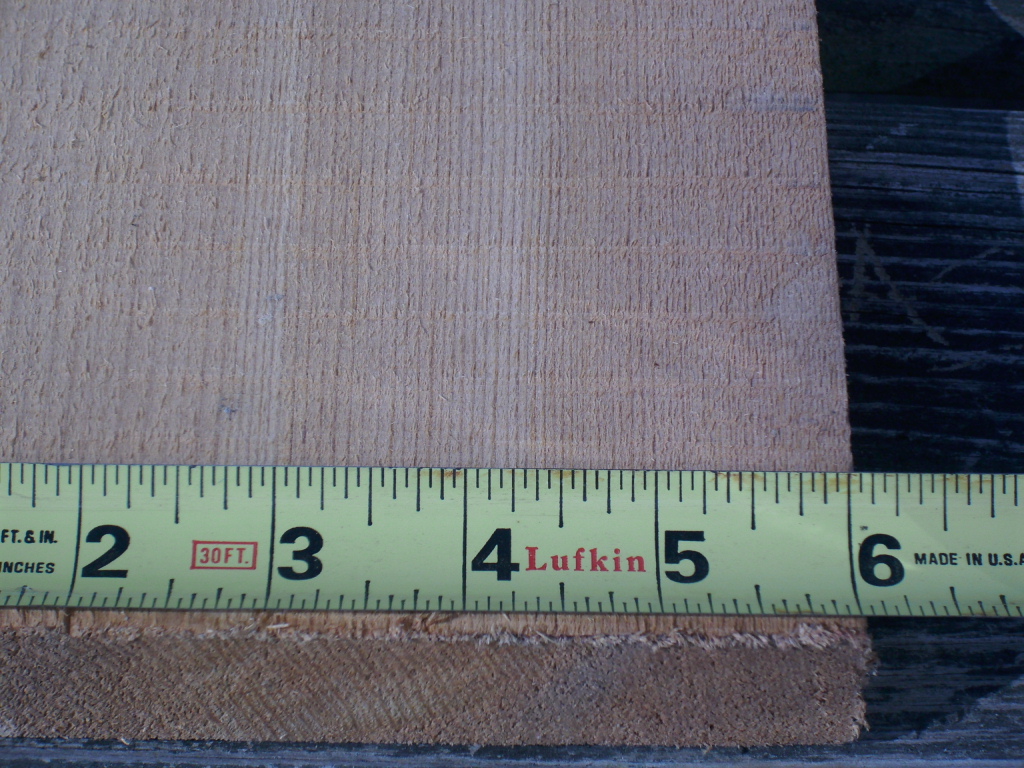 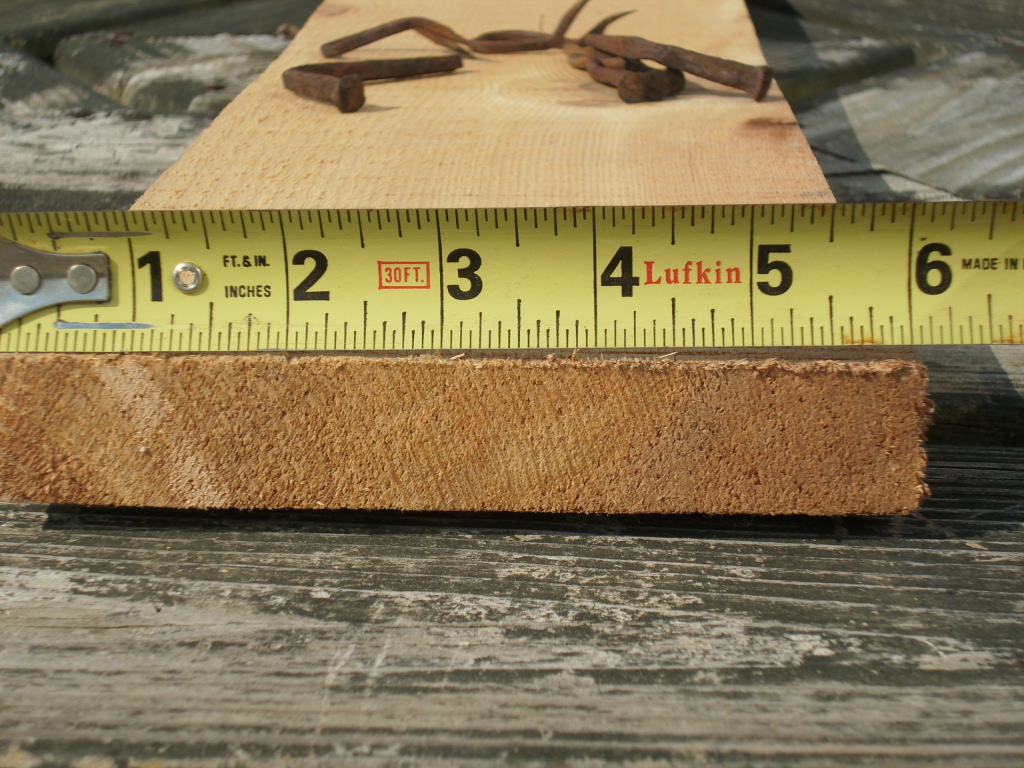 Some of the hardware accumulated over the years: 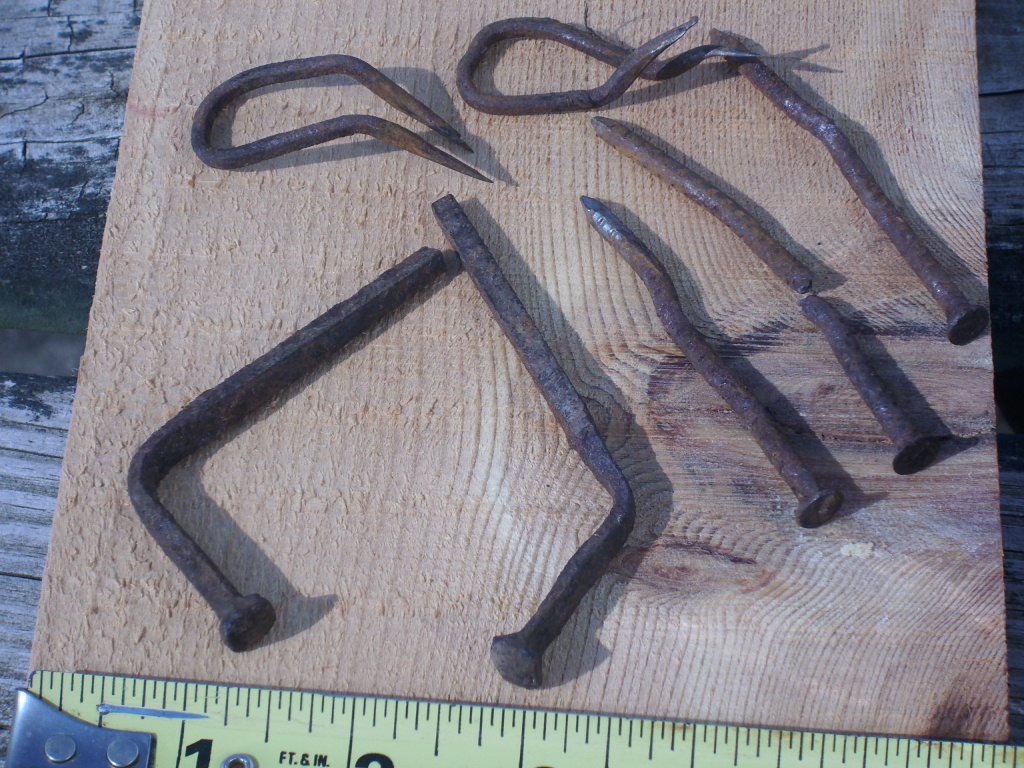 Forum Responses
(Sawing and Drying Forum)
From contributor H:
Do the boards feel sticky like pine pitch? The bottom image really looks like pine. Douglas fir typically has very large growth rings, also the wood has a orange/pink look to it.


From Gene Wengert, forum technical advisor:
Douglas fir was common in the Midwest due to the large size and high strength (compared to white pine or any other local species), cheap transportation (RR west to east was unbelievably low and by 1910 there was little white pine left in the Midwest). The Coastal D-f might have somewhat faster growth at times, but often it was slow grown. Of course, Inland D-f was almost always slow grown. So the color, growth rate, and overall appearance do indeed confirm D-f. Incidentally, the pieces pictured are quartersawn, or vertical grain, which is often the desired grain for D-f.

From contributor D:
There's only the slightest surface tackiness. The second picture captures the true color the best. I wasn't there when they were sawn but it was about a week ago and this board has since had some sun exposure that may have change the color. The second picture captures its true color the best. If it helps, the boards don't weigh much. Thanks for the id help. Anyone want to take a crack at value?

From Gene Wengert, forum technical advisor:
As D-f is rather heavy, perhaps these are spruce or hem-fir.

From the original questioner:
My weight estimate is subjective. I'm used to hardwoods.

From Gene Wengert, forum technical advisor:
It is indeed lighter weight than most hardwoods.

From contributor J:
Since I am one of the few saw millers on this site that lives in the Northwest (north of Seattle) and 50% of what I cut is DF. From the pictures you posted, it is old growth DF. Old growth DF does not has very much color difference like second growth does, (sap wood to heart wood). I have sawed 1000’s upon 1000’s of BF of old fir beams and there is a company south of Seattle that sells it for $7.50-10.00 a BF in beams. People line up to pay this. I sell VG DF for $3.50 a BF in thinner sizes, (4/4, 5/4, 6/4). So, I hope that you understand that what you have should be worth more than $10.00 a BF because of the 32’ lengths and sizes. These beams are worth 5 times more in beams, than re-sawed into thinner boards. Also, some old growth fir is light in weight compared to hardwoods.

A few years ago I won a college engineering contest for building a wood truss that was 88” long and weighed 2.3 pounds. This truss was built from some old growth fir that I had saved from a job and it was able to handle 180lbs. without breaking. I also was not able to use glue at the joints only 5/8 pin nails. This wood had tight rings like in your pictures and was very light and strong. DF in construction is the strongest softwood available, even better than SYP. If you doubt this, look it up in the building code. By the way, there is no such thing as Hem-Fir. This is not a tree. Again, look this up in the building code.


From contributor S:
It looks like fir from here, but I'm not 100% sure so I'll go for your other question. The wood is "worth" either what you want to pay him for it or what you can turn around and sell it for. Some people are going to tell you the beams are "worth" $10 a bd/ft, but unless you can turn that wood into that much cash, they will just take up space in your inventory. If you don't have a use for the beams yourself or a ready market, explain that to the seller then throw him a lowball offer, if he goes for it you get the wood cheap, if not he still has the material in his barn. PS: look the wood over for insects before
the deal is totally done.

From Gene Wengert, forum technical advisor:
Indeed, hem-fir is not a tree, but this discussion is dealing with lumber. Some lumber is marketed as hem-fir which is a combination of western hemlock and true fir.

From contributor H:
He wanted to know how much to pay for the wood, not resale price. Buy it real cheap and sit on it until you have a market, that’s called business. Don't cut the beams until you have it sold as mentioned.

From contributor J:
Well, the wood is not worth anything unless you have someone to buy it. I would try to pay as little as possible for the beams. $0.25 a board foot or less would be a good place to start, or at least to me. If he wants to trade, try to give him only what he might need and no more. If you do this, try to cut the worst of the beams to give back to him and keep the best for yourself. That is what I have done many times before. What is the worst thing that could happen, he could say no? I feel you will be able to make this work to your advantage. Also, if you do get these beams, try to find a buyer as soon as possible. Long beams are hard to store, easy to cut for me. I hope this helps.