Veneer Over LVL for Door-Building

Question
I build doors by edgebanding and face veneering LVL core material. The veneer ends up about 1/8" thick after final sanding. On a couple of doors, the veneer and the veneer only (not the LVL core) has split lengthwise. Does anyone know if moisture percentage is the culprit? Stiles are approximately 6" wide.

Forum Responses
(Architectural Woodworking Forum)
From contributor T:
Not sure of my facts, but I think 1/8" is too thick to be stable as a veneer.


From contributor B:
What is the installation environment? Are the failed doors interior or exterior? This type of failure is typical of either high moisture content at time of construction or extreme drying out after installation. If the moisture content at time of construction was in an acceptable range for your area, then the most likely culprit is excessive drying. This can be due to the sun (exterior door facing south with a dark paint color, for example) or heat (door installed right next to a heat register).

From contributor D:
MC is most definitely the culprit. The LVL has taken on moisture, or the veneer has lost moisture, or both. One typically unanticipated problem with using dissimilar materials in stile production is not only their different reactions to MC change, but also the fact that they have often been stored in different locations, then brought together at assembly. Lumberyards around here store the LVLs outside, in open sheds - "you're just going to nail 'em up, it don't matter none." Meter everything, store to acclimate, build with care. Realize that the rule with such construction is that with more parts, there are more points of failure.

From Professor Gene Wengert, Sawing and Drying Forum technical advisor:
LVL has a manufacturing MC of 9% to 10% MC typically. If the door is an exterior door, the LVL can increase in moisture to 12% MC or more. This, especially because it is the first pickup of moisture after manufacturing, can be a large amount of expansion because of springback. The veneer MC can actually be the same as the LVL, but with moisture gain, this cracking will happen. You might want to consider a different core material. Thicker veneer is not the answer.

From contributor E:
What species of veneer? What type of glue did you use for the veneer to LVL bond? How did you press this veneer (vac bag, hot press, cold press)?

From contributor F:
Has the veneer and the LVL been acclimated together and is the MC difference not more than 4% at the time of pressing? What is the wet mil thickness of the PVA, and do you wet both surfaces?


From contributor M:
I have seen this quite often. I believe there is more movement in some LVL than originally thought. Rip and flip the LVL 90 degrees to the face, and no more problems. 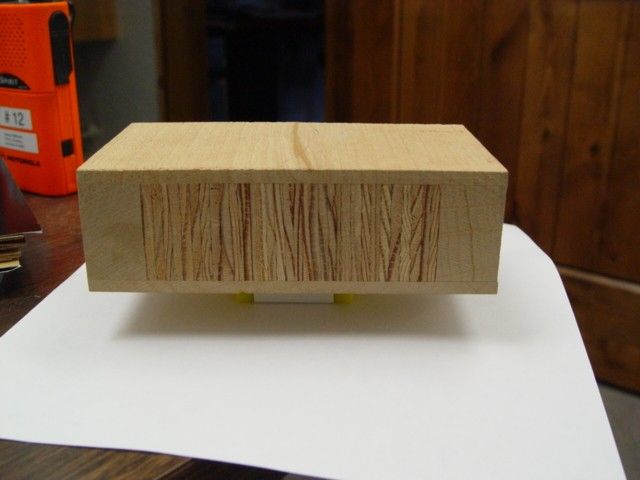 
From Professor Gene Wengert, Sawing and Drying Forum technical advisor:
LVL is fairly stable across the grain, but the thickness (left to right in the photo above) will have substantial swelling the first time it is exposed to moisture increase. This is because it is pressed when formed and glued. This pressing pressure is released when there is moisture regain. This process is called springback. The key is moisture.

From contributor M:
Interesting, Gene. Laid up the way in the photo is the only way we have found LVL to be reasonably stable from a veneering standpoint, but also is much more rigid over the length of the stile and seems to have less failure in warping. I am fairly certain that the questioner is simple edgbanding the LVL in its original state with laminations parallel to the face. Also, unless you are drying the VG fir yourself, I would look for high moisture content. At 1/8" you are probably resawing and making this yourself and most commercially available fir is only dried to 14% or higher.