A little puzzling over desktop spans, frame stability, and related issues. May 16, 2008

Question
I'm building a knock-down desk out of ash (assembled but unfinished frame shown in the picture). I'm planning on building the top slab out of either red oak, elm, or ash - 72"x36"x1.25". The frame footprint is 67"x33". The top rails have appropriate cutouts to accommodate expansion in the top slab along its width. Apart from the two top rails on the sides, the top slab (1.25" thick) will be unsupported for 67". Will it sag in the middle? Will it be necessary to attach a stiffener on the underside of the top slab along its length to prevent it from doing so? 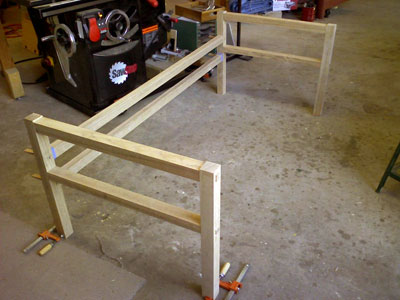 Forum Responses
(Furniture Making Forum)
From contributor A:
Having the top sag may not be your main problem. 1 1/4" oak, elm, or ash finished thickness is unlikely to sag over a 6 ft. length, even under heavy loads. However, if you don't allow the wood to stabilize before gluing it up, you could get some torsional stress (twisting).

This brings up my main concern - you may not have enough stability in the base. There is no cross rail in front to complete the square. Also, your two back rails should probably be spaced a little further apart. I assume from the picture that you've already built the back, so I would suggest that you add a front rail to connect the two trestles. Even a 2" wide rail would do a lot to stabilize your design. It would also eliminate any possibility, however slight, of the top sagging.


From contributor K:
Agree with contributor A. Also, the Sagulator at woodbin.com predicts .11 in of deflection with a 200 lb load using white oak.

From contributor R:
I agree with the comment of not having a front rail. One thing that sticks in my mind from a course with Jere Osgood is that you should be able to sit on any table base without the top and have it be structurally sound.