Making board and batten siding from freshly sawn lumber. June 19, 2003

Question
I'm sawing up a bunch of lower grade logs to build an addition on my barn for my new equipment. I can account for shrinkage in the frame, but as far as siding goes, is this why board and batten was invented? I could nail the green boards near the center so they wouldn't try to tear apart, and then pin the edges down with battens so that the wood can shrink. Is this doable? Otherwise I'll just go buy steel. What do you think?

Forum Responses
(Sawing and Drying Forum)
Go ahead and nail the boards up and let them dry before putting the baton strips on. The wider boards you use, the larger the cracks will be. I cut my baton strips at the same time I cut the siding boards but didn't nail the batons on until everything was dry. Works great with poplar (tulip).


Butt the siding board up as tight as you can, and yes, nail in the middle. Then cover outside with battens, nailing in the middle of the batten and through the edge of two boards. Some people use 2" battens; some use 3" battens. It depends on the width of the siding and how much it will shrink as it's drying, or your taste as to how you want it to look.

Another method is to cut 1/2" thick battens and put them under the siding behind the edges of two boards, so that the battens are only seen from the inside of the barn addition. 1/2" battens are usually 3" wide.


Why not just let it air dry first? Wouldn't this solve a lot of the problems?

The board and battens will work well for you. Nail (as has been mentioned) in the center of the board (if two nails, put them no more than 2" apart in the center). Butt the boards edge to edge if green.

When you put on the battens, screw them on (you won't get nail pulling) in the center of the batten, and *not* through the boards! The green boards will shrink as they dry and they will slide under the batten. The battens can be "re-tightened" by turning the screws. You will have nice-looking siding and you can put it up green.

From contributor R:
Due to my limited experience, I have to disagree with the nailing method mentioned. I've sided a few sheds and barns. We usually throw 2-3 nails in a board depending on how wide it is. But we nail evenly across the width. We did try nailing in the center, but we had more boards curl and twist than split when we nail across the width. We nail up the battens (3") at the same time, and the boards that curled popped the battens almost all the way off. We had to re-nail with longer spikes and still couldn't draw in the boards. I'm no expert, but in my dozen or so experiences, nailing the center caused us more problems than the other way. We use hemlock and larch, if that has any impact on our experiences.

The structural grade lumber should have a fairly good shear strength, in places such as floor joists and roof rafters, and other framing lumber. The higher the grade of lumber the higher the shear strength. White oak select grade has a very high shear strength. Use your grading experience and knowledge of wood species to decide what lumber will be suitable for your project.

With the board and battens, could one screw the boards with galvanized wood screws, and wait for them to dry, and then unscrew them and screw the boards closer together? That sounds like double the work. Or nail the battens on once the boards have dried out good.


Twenty-four years ago I built a 24' x 26' workshop with green poplar and sycamore. The framing, etc. was all poplar. It was so wet that water would run from the nail holes as they were driven. Because of this, I used extra bracing and have not had to replace any boards, and have not had any trouble with warping or bending in any place.

The sycamore was used for a board and batten type interior. It was not quite as wet and have had very little problems with it. A few boards split near the ends, but not enough to need replacing.

I say go for it and use a little extra bracing! Why buy steel if you have wood at your fingertips?


I would tend to agree with contributor R. Just 2 nails at least an inch or more from the edge, more if a wide board and nail the batten on in the middle. Try to put all the battens on with the rings going the same way to keep the cupping of the sides toward the building. Even 2" will curl outwards with only one nail in it. It does work on the siding as well if you just nail in the middle, but you have to keep the cupping toward the building.

They have been building houses and barns from green oak in this country since sawmills followed white men in here. We build barns all the time and but the lumber up within days of it coming off the saw. Boards want to cup one way so put the "hump" out and put one nail in the center. Jam them up tight and put the batten on so that the nail hits between the two boards. On wide boards (12" or wider) put 2 nails about 2 to 3 inches apart in the middle. I have a house in town that was built out of green red oak in 1940 and it is a very solid house. 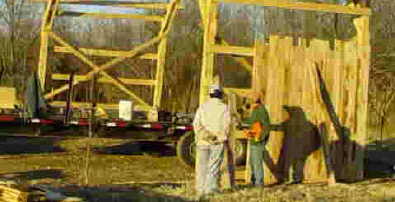 I use ring shank or spiral twist nails on my buildings. Galvanized if possible.

If you want the hump out on a flat sawn board, the bark side of the board should be towards the barn.

Comment from contributor A:
I was taught to never nail a board in the center. I sided my house with two week sawn white pine. Never had a problem. Nail on edge enough to hold the board up, then nail battens twice - one in each board in a 16 or 2 foot pattern. You will have less dammage this way in the long run. All boards will move and a nail in the middle will do it in over time.


Comment from contributor B:
I built a 24' x 56' barn about 8 years ago out of sycamore and it was green. As I nailed it up water was also running out the bottom of the boards. I guess I made the mistake of nailing them up tight. The boards bowed, cracked and split. I put the battens on them as well and should have waited because they even split. I did some patching and covered the inside a few years later with 1/4" plywood. It turned out ok, but I would never do it again that way.