Shop owners ponder the problem of how to fit adequate dust collection into a small space. June 15, 2014

Question
I’m looking for some method of dust collection meeting the following requirements 1000cfm at 7”sp with less than 3’ x 3’ foot print and under 10’ height. I have a 20 hp 36” wide belt sander and a 20” 7.5 hp plainer. I can go into the attic or outside but I don’t want to waste the heat. I’m tired of throwing money at it, and to maybe help somebody else I’ll share what I’ve done so far.

My first collector was a two barrel setup in the attic - hoses in and out of the first 55 gal barrel then through the blower into a smaller barrel with filter bag. Piped from a central point I used a hose to move from machine to machine. Problem was that because the planer shavings were not chipped they took up a lot more space and the thing was always full, and emptying it was a pain. Not to mention the heated air getting blown out.

So I bought a self-contained roll around unit with fabric bags. Problem was the filter bag wasn’t big enough and not made of proper material to filter so I replaced the bag with a larger one made of suitable material – then it was too big to be movable in half the shop (I have a 2’ beam in the center of the building leaving about 8’ height).

After piping the building with 5” and 6” pipe I hung the blower on the beam and put the bag assembly in the corner behind the door. This worked fine for seven years until I got the wide belt then it needed more filter area – lots more. Last year I got a 5 hp cyclone with two large cartridges which works fantastic on chips but when I use the wide belt, the cartridges plug solid in a few hours and it takes an hour to take it apart and clean them. To give you an idea of how plugged they get, under normal operation it draws 22 amps after using the wide belt for a while its drawing 13. I can’t afford to just throw the cartridges away and paying for 22 amps of juice when I’m using smaller equipment was ridiculous so it’s setting there while I am trying out another idea. I experimented with using a borrowed frequency drive (variable frequency drive) on it and that will solve the power consumption issue, but not the fine sanding dust-filtering problem.

Currently I have a Torit mod 84 single stage unit operating in the middle of the floor, always in the way, which the Torit rep said “should work if I shake it down every few hours”. This is a 3hp unit at 1000cfm and it handles the sander great – it’s the plainer that chokes it. Because un-chipped plainer shavings are large and light, enough get carried across the outlet funnel, smack into the access door and pack themselves together until the pile gets large enough that it collapses and plugs the discharge hole resulting in an impacted filter compartment. While not taking as long to clean out theses jams as the cartridges I have to do it in the shop. This separating hopper area will hold more than 40 gals of chips, what a mess. If I spend some more money I can get it set up to shut down before it gets impacted, but what happens when I have a large board going through the plainer when it stops and the first I know about it is when chips start coming out of all the cracks in the plainer. If somebody hasn’t solved this problem before, my next experiment will be a small cyclone in front of the Torit but at this point I don’t know where to put it. I should have built a bigger shop! 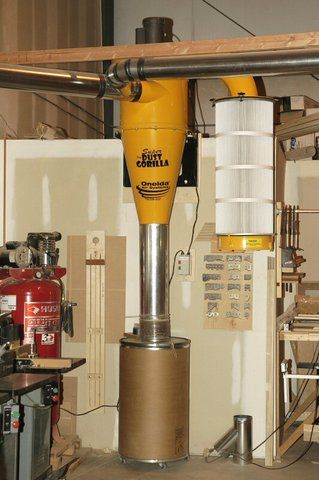 
From Contributor U:
Contributor G I had a similar problem in my first shop - low ceiling and not enough room for the two bagger setup. We built an attached shed to the side of our building, and ran the pipes through the wall. This room was totally enclosed, probably about 8' x 6', just big enough to hold the collector and have some wiggle room. We also quickly realized how fast our heated and cooled air was leaving when we ran the unit. We then cut out a large portion of the wall so the air leaving the bags could flow back into the shop. I am actually fixing to downsize again, and I thinking about doing this again. By putting a large access door on the exterior wall of the room it was a breeze changing bags and taking the full ones out.

From the original questioner:
That’s similar to the cyclone I have but a different brand. Have you used this with a high load of sanding dust? The last time this one plugged was while running a couple thousand feet of fir 1x4 tongue and groove 120 grit at about 17f/m eight pieces at a time. On this one the cartridges are in a box above it rather than hanging down – which may be better, because getting at them for cleaning wouldn’t be such a bother.

From the original questioner:
I'm afraid that's what I'll have to do. I am hoping somebody has figured out a simpler method that they'd share.

From Contributor G:
If the bin the sawdust falls into is a very good vacuum you will get very little flour in the filters. The better the vacuum the less that will get through. I don't have a wide belt sander, only an edge sander that produces flour dust. The rest is sawdust form the TS which is pretty fine. When I open up the bin at the bottom of the filter there is usually nothing there. After I beat the filter I usually have about half a gallon of flour. This is after weeks of use.

From the original questioner:
Mine’s actually a push-through type so the cyclone is under pressure rather than vacuum. I prefer this configuration because plainer shavings are chewed up into small chips that take less space in the collection bin – so less emptying. It works great on everything but the wide belt, which is my frustration.

From Contributor G:
I specifically chose the pull-through so I can use floor sweeps and the larger chunks of wood that get in there don't damage the impeller. A push-through will let flour through easier because no vacuum in the bin area makes it harder to drop out.

From contributor F:
I have to agree with Contributor G, a good cyclone should handle that with no problem. I'm not sure about the push vs pull setups but am guessing that means the dust goes through the fan instead of directly into the cyclone? Can you modify it so that it works like a normal cyclone?

I run a 7-1/2 hp Torit cyclone with a 43" Timesaver (among other equipment) and most of the dust goes into the barrel where it belongs. I also added an extra 50% of filter area when I put the system in to ensure good airflow. It works great with the one exception that, like you, I have to empty planer shavings way too often. The only way I know to get around that is by adding a rotary air lock and a blower to direct the shavings into a larger storage area.


From the original questioner:
To contributor F: Do you have a bag filter?

From contributor F:
Yeah I chose to go with the bags. I wasn't sure how comfortable I would be with the cartridges, and they would have also added considerable expense. I have three 24" x 9' tall filter bags that do a great job of keeping the air flowing. I have a 7" and 4" drop to my tablesaws which are un-gated as a safety. I can easily run two other 6" gates without seeing too much drop in performance, though in my shop it's usually only one open at a time. The only shortfall is the overflowing barrel situation which mostly occurs while planing. As soon as it's full it blows stuff right into the filter bags. It's a real pain but there's just too many other places to put money to invest in a RAL right now.

From Contributor G:
With the dust barrel I put a light behind my clear drop tube and I can watch when the barrel becomes full. I know I have a little leeway; I can have the chips fill up the cyclone body a bit without the chips going over to the filter. I have stuffed that filter a few times and it costs 45 minutes of my time to clean it out every time I do it.

From contributor F:
My drop tube is black, well it was black. It's now red from the layers of electrical tape I wrapped it with in order to seal all the little pinholes that kept showing up! I'll have to replace it someday and maybe I'll find some clear hose. The worst part is my cyclone actually has a sensor installed to shut it down when it overfills. I just have no idea how to hook it up so it's just sitting there mocking me. One of these days I'll have to get an electrician in and get it wired up.

From Contributor G:
I think that is the last thing you want it to do. I would instead set it up to an alarm that tells you the bags are full. I would never have it turn off the DC - just a light or a buzzer or both.

From contributor Z:
Check out the Torit UMA 150. It will give you the desired CFM with a fan that is enclosed in an acoustical chamber (72dBA). Foot print is 30" x 30" and height varies depending on the dust capacity. The unit arrives factory-wired with a shaker motor which automatically shakes the filters upon shutdown.