Tales of Lightning Strikes on Trees

Question
Yesterday afternoon while driving toward my house in Dummerston, VT I saw a single lightning bolt about two miles away that seemed to be close to my property. No wind, no rain, just a bolt of blue and a thunderclap. When I got to the house our little cattle dog was nearly bouncing off the walls. I saw nothing out of place and figured a stray dog or whitetail must have passed by the sliding glass door and gotten her riled up. But this morning, on our walk, I came across what looked like a formerly healthy 18" diameter white pine that had exploded - there's no other word to describe it. There were large pieces of the tree fifty to sixty feet away from what was left of the trunk and the whole area smelled like green pine. Though I can't be 100% sure of what happened, I figured the lightning had hit the pine, super-heated the sap and blew the thing up. At least that's what I'm assuming. Does anyone else have a good tree and lightning story or pictures? 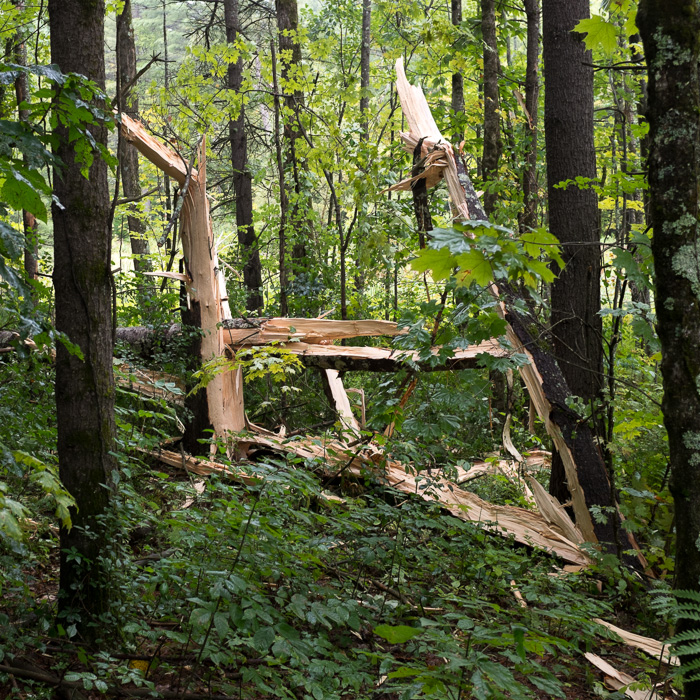 Forum Responses
(Sawing and Drying Forum)
From Contributor B:
I live in NW Oregon and spend many days in the woods, walk 'em every weekend if they're not closed to fire danger. I’ve seen several lightning events strike trees around the way, pretty impressive. One was a Douglas fir, about 36" diameter that was hit on top and split top to bottom but left just enough to hold the tree together.


From contributor T:
I visited my brother in S. Carolina and we dropped an 80' pine killed by lightning. It must have been a "lower voltage" strike as all of the bark was separated from the trunk but still in place. Lots of critters were thriving in the gap. The trunk was good lumber.

From contributor K:
Usually the lightning just dances around the outside edges of the bark, probably using the little streams of water that form by grooves in the bark, and limbs sending more water into certain channels. Lightning is not just kaboom. The flickering we perceive, comes from a bunch of little finger size arcs of plasma dancing around in a general area, but our eyes and mind sees it as one big flash. All electricity looks for a path of least resistance, and while pure water is not a good conductor, impurities like road dust, and the tea from weathered bark etc. improves it. If it goes down a little stream on the outside, the instant steam explosion on the outside, can damage the bark like hitting the outside with a sledge hammer. Of course, if it goes down the cambium layer, the bark gets blown away, revealing bare wood.

Back when I was a runner, maybe 30 years ago, I was out of a remote forest road which was blocked off. Late Spring, the gravel was soft from heaved freeze thaw cycles, and no auto tracks yet for months. Yet a few miles up the road, I found a piece of fresh raw oak out in the middle of the road. I picked it up scratching my head in wonder about how it got there. I'd been circling a little mountain peak, so decided to short-cut by going over the peak. As I ascended, I started finding more and more wood, until finally I came to the tree. It made yours look tame. All the trees within 50' were draped with fiber that looked like spaghetti, with about a 6' tall stump out in the middle. I was just blown away by the site. My little found piece about 1 x 1 x 6" must have been 250 yards away. As I headed down the mountain, I counted my steps to where I found my last piece. It was another 200 yards. I wondered about that for years.

Then around 2003, I cut a tree that held the answer. It was a big black tupelo with a big burl about 30' up. The burl had a hole near the top, which must have been along one of those channels which fed rainwater into the hollow, which was about 4" diameter where my chainsaw blade cut into it. I was looking up when I felt the warm liquid that the chain was dragging toward my crotch. By the time I looked down, I was soaked down to my boots, as I jerked the blade out, the stream from that head of water shot out 6' for what seemed like a minute. What could I do but laugh. I don't think I figured it out at that moment, but later, the thought occurred to me what and explosion that would make, if that volume of water had been turned to steam inside that tree in a small fraction of a second. I sawed one tree from the National Cemetery here in LR which had been hit 47 times. One of which blew a 4" x 4" strip out of the side back in 1954. There were another 12 scars around that ring, which would have been some of the flickering of that same strike.
That year was one of the hottest years on record for here. There were 60 days straight over 100ş F with no rain for the whole state. This strike would have certainly have occurred when the rain came that ended that drought, with lots of stored energy in the earth.


From Gene Wengert, forum technical advisor:
In 1962 I was part of a small team studying lightning strikes on ponderosa pine near Flagstaff, AZ. We saw some trees with merely a 2" wide streak with bark removed and sometimes a streak of sap that must have melted and flowed to the strike area because it was hot, and then the sap cooled and remained in the wood. At other times, the strike resulted in a significant amount of damage and was similar to your description.

From contributor R:
A soft maple across the street from my house took a direct hit. Lightning ran down a main branch and knocked a pair of squirrels right out of their nest. Both were dead on the ground, the female had a line of fur missing down her belly. They couldn't have known what hit them. Bark was all across the street into my yard. It's still standing, but each year the scar on the trunk looks worse. No bark at the buttress for about 10" wide. It's an old silver maple, it's going to cost them a bunch to have it taken down since it's so close to the house.

From contributor E:
For all of my life I've been an arborist. Over the years I've seen many lightning struck trees. Some right after the hit and others years later when they finally died. A dear friend of mine was killed taking down a lightning struck white pine. It broke below him and he fell 60'. One job is very memorable. A client was at his kitchen sink doing dishes while a thunderstorm was flash-banging outside. A bolt hit one cottonwood and sent a blue ball of flame down the cable dog-run he had to another cottonwood. It flashed that one and the blue ball ran back to the first tree! He was dumbfounded! Tree #1 was splintered and had to come down right away! I told him to monitor #2. If bark started flaking off or it died he was supposed to call me. No calls, it must have been ok.

From contributor O:
About 30 years ago on my farm in Brookfield, VT, we had a tamarack about 10" in diameter hit by lightning and it exploded sending a piece about 4' long and 3" thick around 50 yards, splinters all over a wide area. Yes lightening goes up, we had a hit on a barn I was in and it went up the wire for light in haymow and up through the metal roof bending a slot in the roofing up!

From contributor F:
When I was a young lad back around 1964 or so, my family and I had gone to eat dinner at my grandparent's house and there were storms going on that day. Got home and there was a pile of charred wood in the front yard. Not like a big mound - just burned wood scattered about the place. It was getting dark so we couldn't do a real search. The next day we solved the mystery. A huge double-trunked red oak in our pasture, about a hundred yards or so from the front yard, had been struck by lightning. It had gouged a scar about a foot wide right down between the joined trunks and the bark and wood had scattered everywhere. It took that tree about 30 years to finally die. It's horizontal and rotting presently.

From Contributor H:
I grew up in Northern Wisconsin (70 miles N of Green Bay) on a tree farm. On the coldest winter days, you would occasionally hear a poplar (quaking aspen to be correct) explode. Even though most sap descends in the winter, the wood still has enough moisture in it and on really cold days, it would freeze and expand to the point where the tree would burst - sometimes quite loudly. It didn't happen often, but was kind of neat to hear it when it did.

From Contributor S:
My dad had two yellow pines planted on each side of the driveway. Lightning killed one and he had me help to remove it so it wouldn't fall in the road. We tied a rope about 25 feet up and to his pickup to make sure it would fall in the field. Then using his chainsaw I started to cut a notch but only got about an inch or so and the saw started to quit putting out shavings and started to smoke and spark. So we put on his new spare chain. Then I started to cut higher up another notch but same thing happened, first shavings, then saw dust, and then smoke and sparks. Then I called our neighbor. He brought his saw over and tried to cut and he too cut a little then smoke and sparks. All we could do was to ring the 24" pine maybe 11/2" all way around then used a block and tackle to snap it off. Once on the ground we found out that the whole tree was turned into lighter pine/solid rosin, we couldn't cut it up. It laid in a field for years and we finally broke it up with a backhoe years later.