A variable speed fan and controller can save energy during times when the dust collector is not required to operate at full capacity. October 16, 2012

Question
I recently read an article about a shop with a 75 hp variable speed blower on its dust collector. As more blast gates were opened or closed, the motor rpm varied accordingly. This was stated to be a great energy saver since most of the time the motor ran at about 25% capacity.

Our collector will be 60 hp, which is more than we need most of the time. Is anyone familiar with such a system? I saw one at IWF a while back. It was on a new Dantherm unit. I am looking to put one on my used Torrit which will be installed this summer.

Forum Responses
(Dust Collection and Safety Equipment Forum)
From contributor J:
I thought about doing something like this with my smaller collector. You should be able to get a VFD that uses a static pressure sensor as an input device. Then program the drive to maintain a constant negative static pressure in the duct. With few gates open, the SP will be high, so the motor will be run slower. As more gates open the SP drops and the drive would speed the motor up. Is that similar to what is on the market? Or is anything (non-proprietary) on the market at all?


From the original questioner:
What contributor J is describing is what I have in mind. Whether it works off SP or something else doesn't matter, just so it works. I assume Dantherm's unit is proprietary but a non-proprietary system is what I am looking for.

From contributor O:
Ecogate sells systems to do this. It is also possible to build your own system using a VFD. There is a danger of overweighting and collapsing the duct work if not used correctly.

From contributor J:
This thread spurred me to pick up where I left off. Last year I discussed this idea with my local power supplier and they mentioned that grant money for efficiency projects might be available for this. Then I got busy and this went onto the back burner.

Setra makes a duct pressure sensor with variable output (either voltage or current) that can be used as an input for a VFD. They said that controlling fan speed is a typical application, as is measuring pressure differential across filters. Price ranges from about $320 (no display) to $470 (with display).


From contributor M:
Here are my results. I have my own 3 phase transformer putting out 400 amp for a two person shop. Sparky separated the 400 amps into 2 x 200 amp panels. My wife has a huge glass fusing oven on one panel which I share. On this panel we have a VFD controlled air compressor (18 amp surge and 11 amp fla) as well as the dust collector. All the heavy loads 7.5-15 HP high surge motors on the other panels have VFDs keeping things cool.

On the dust system: The manufacturer recommended a 10 HP motor. I forced them to drop it to 7.5 HP. Of course, that caused a huge inrush current (150 amp). We fixed that with a VFD and a SP analog input to help it stay in bounds. We set min and max power manually and allowed the VFD to move things around within that range as SP demands changed.

Big joke was on me. The manufacturer tried to get me to buy their VFD model for 15% of my actual cost. I am okay with that because I learned a huge amount about all this and have applied it with amazing luck to things like a custom made variable speed 24" planer built around a Northfield monster. Great fun, high cost.


From contributor R:
You still need to maintain velocity/air speed in the main trunk lines to keep the debris airborne.

From contributor M:
On the CFM vs. SP issue: When I say we measure SP with an analog device then feed that signal to the VFD, I mean we measure SP at the fan inlet. These fans are actually huge impellers today.

We calibrated the fan using three bits of data - CFM at the end of an 11' spiral duct 20' long; SP at a point 6 inches above the fan inlet; and amp draw on one leg of the 3 phase feed to the fan (not to the VFD). All that data convinced me that SP at the fan inlet is a good approximation of fan performance.

The manufacturer thought all we needed to do was use their fan table but I wanted some kind of field data for the insurance company. There was never more than 10% difference between the fan table, a "ductulator gizmo" (that round thing the installers carry around) or the field test.

In my practical experience, if the fan is operating at its designed SP, and you have used correct duct size calculation from any fan vendor, I have never seen a problem.

Make sure the SP is at or above your wide belt sander specs and that the CFM is at or above your planer specs. Both are measured right at the machine connection. I know the engineers will say you are measuring two aspects of the same thing, but I find low SP kills sanders and low CFM kills planers. I don't know why.

That is all the info I have by way of testing. The whole thing works great and is so quiet I forget to turn it off at the end of the day. For the eco-nerds, we cut power use by 15% at maxload (wider belt or planer) and 65% at low loads (two 4" pipes running together).


From contributor D:
As an alternative, you could also run multiple fans and turn each one on for the various sections of your shop, as we have done in this example for the customer. 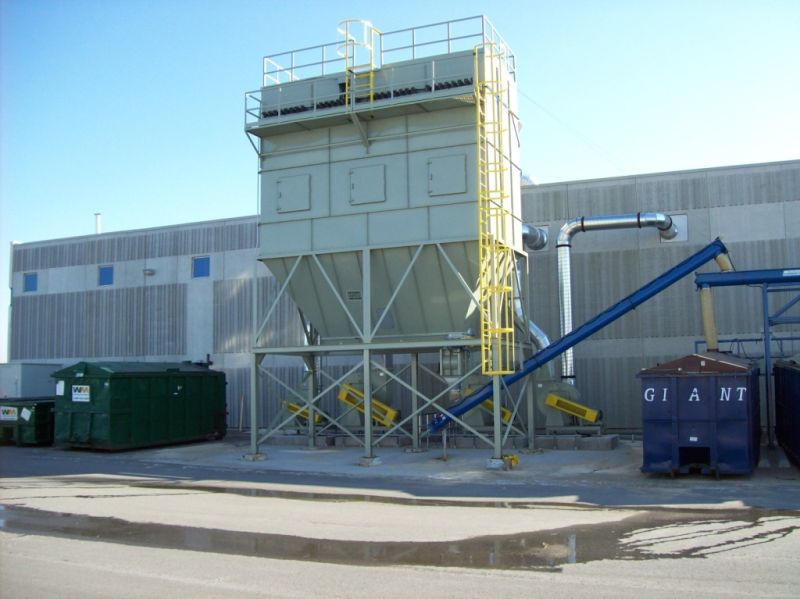 
From the original questioner:
Contributor D, I like your idea. What provisions are made to stop one fan from backdrafting into another in a multi fan system?

From contributor D:
Two options are to use interlocked dampers or gravity dampers. This is a push through system and dampers prevent blow through into non-operating fans.

From contributor O:
I have a Belfab system with 2 fans into 1 baghouse with gravity dampers. We occasionally experience back drafting after heavy running of a multi-head sander on one side or the moulder on the other side. Material builds up under the top hinged damper, keeping it open a bit. It doesn’t happen often, but is irksome when it does. We have learned to run both fans for a while after heavy planing or sanding to clear the system.

I talked to the Belfab engineers last week at the show. They run into this occasionally and suggested thicker gaskets on the doors or a partition in the middle of the unit to divert airflow from the opposing fans. I think weighting the dampers may help also. The last resort would be automatic gates on each 12” inlet. (Expensive.)

Other than this, the system has worked out good and saves electricity. We have high demand rates and are still considering a VFD system with auto gates. The DC is the only equipment in my shop without soft starts. The utility recently recorded my meter and determined the starting of the DC was pushing demand up more than the larger motors with soft start.


From the original questioner:
Thanks for the info. I am leaning toward the two fan option. I think two 30 hp fans is close to what I need. My two biggest CFM requirements would each be on different fans, so I think this will work well for me. I do have a professional company sizing duct work and fan sizes for me.

VFDs are an option, but I think I will try the system without them at first. They can always be added later. I wish I could get straight answers from my power company, but maybe I will have to push them harder.


From contributor D:
That idea seems to be catching on more for the shops we supply and install systems to, as it gives them flexibility, and it's easier to replace a standard 30 hp motor than a VFD. Plus I have found that working with VFDs makes the fan performance suffer, as it is basically designed to pull a certain volume of air at a designed speed. When this is ramped up and down the fan curve is off, the static pressure in the duct is out of whack, and it becomes a balancing nightmare, as the filter media begins to cake up.

Honestly the most successful systems at the least cost that we have out there for the past 46 years are simple shaker systems using Beane material and one fan, picking up several hoods using blast gates for on/off or balancing. We just had a customer replace their original bags after 26 years, on a shaker! You won't get that out of a pulse or cartridge system. Unbelievable. And the unit still performs very well in suction and clean modes. I think you should consider two 30hp shaker systems.

If your shop allows the cleaning breaks required at coffee and lunch, the timer system will allow you to maintain the lowest operating cost. Running the two smaller 30hp systems will probably in all cases be less hassle than a VFD unit.


From the original questioner:
Thanks. Two years ago with I bought a used 11.5' diameter Carter Day DC with 144 10' long bags. Maybe it was a mistake, but I have it so I might as well use it. I have plenty of room to grow into it.

I was planning on ducting the two fans into the 4' square inlet and having one larger return air duct back into the shop. This would make them dirty air fans. Is there a better configuration that would make the fans clean air?

This Carter Day is an RJ model and has an externally mounted fan type blower mounted at the top of the unit blowing through a rotating arm that back blows into the bags to clean them.