The Woven Wood Doors are finally in place. So much for March deadlines. The restaurant is under a trial opening this week. Last post was 6/11, and the thread was started 4/13.

The doors look fabulous - We are very happy. The letter "A" that is also the handles is not as nice as the cast bronze I was told was to be the door pulls. This is 5/16" steel or so, and not so nice to the touch, with hard square edges that are bright compared to the faces.

The worst part is that whomever - the handle maker we think - used steel hardware store crap to mount the letters. Went clear thru the door!! He did not know about studs and blind mounts. I think I hear a "not my job" in the echoes.

The finish is Sikkens with a glaze to
accent the depth.

Unfortunately, the place has a dress code (!?!), so my colleague and I cannot saunter in and order up a drink at the bar and admire the doors from the inside. I would have blown the dust off my shoulders....

Thanks for all the nice remarks along the way. I am now sketching about with hopes for a Celtic Knot. I need to find a wealthy Irish mobster with cash to burn.... 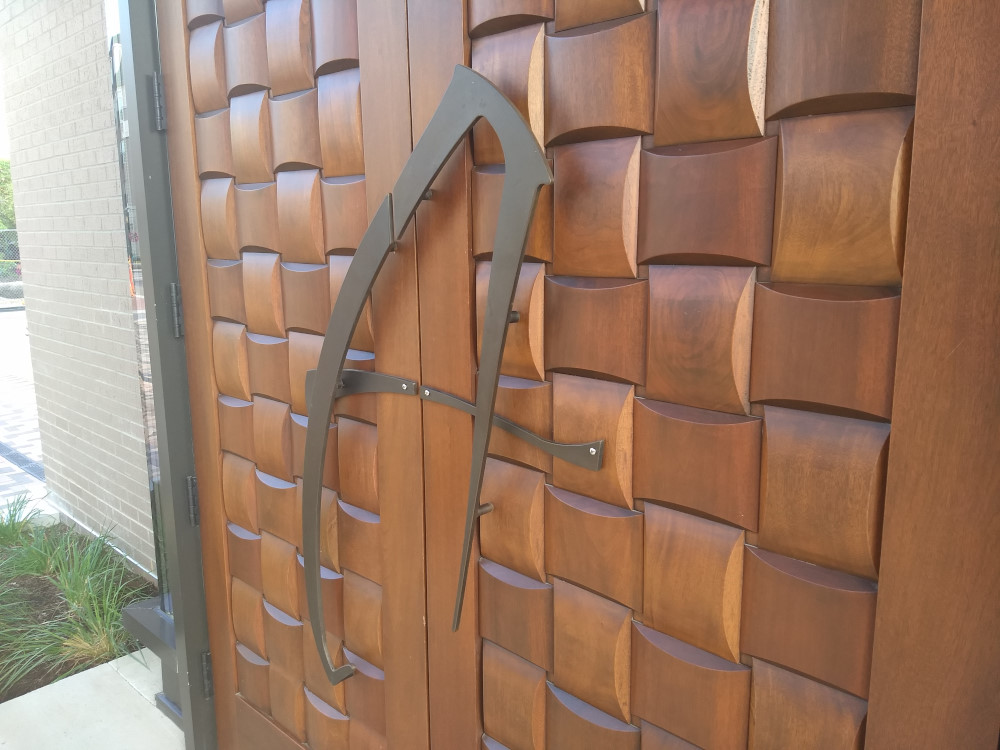 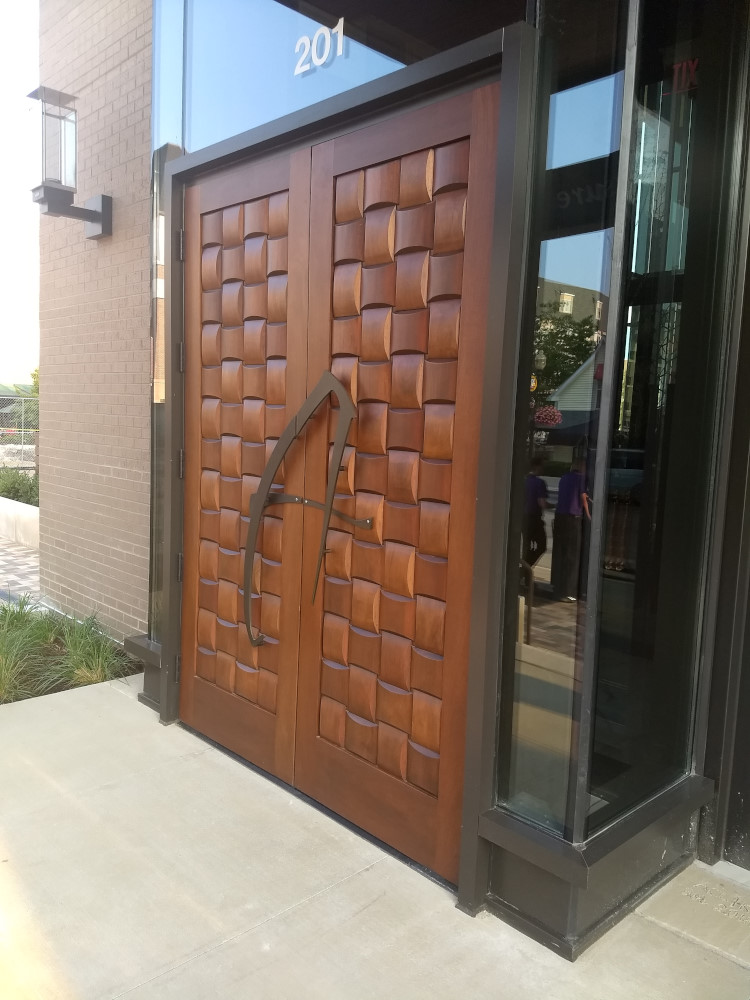 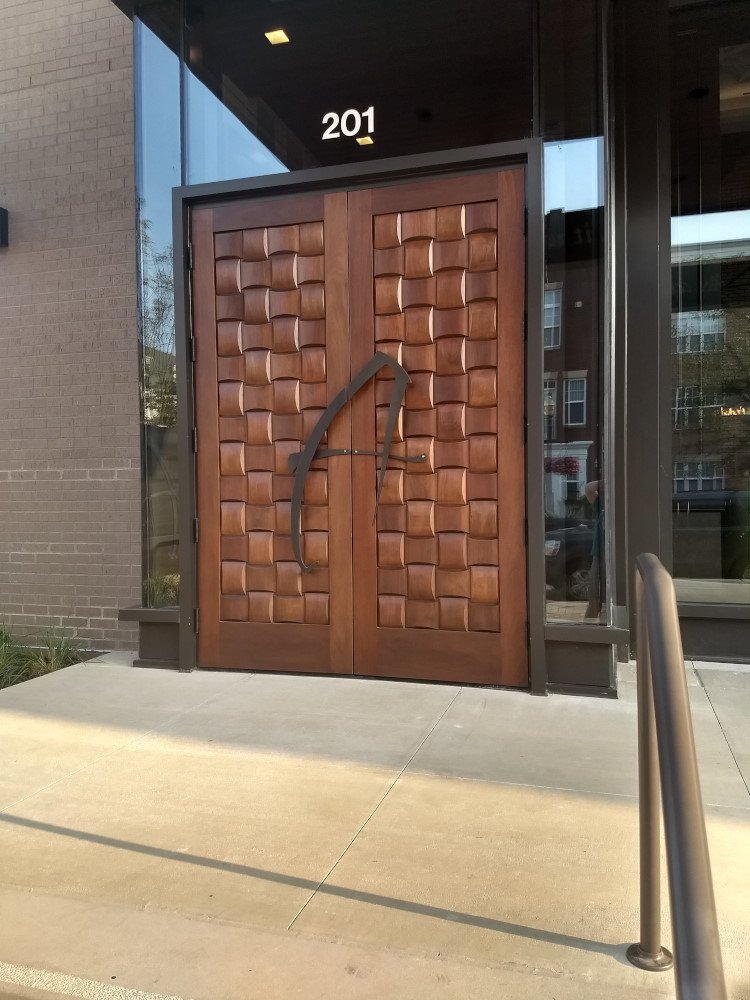 Very nice , now you need them to start franchises and buy all the doors from you for the next 10 years so you can build that Maui Condo retirement fund.

It's been very interesting following the thread from beginning to end.

Came out nice! To bad they ruined your expectations about the door handles. It was a long road, but it finally looks like a rainbow at the end.

It's great to see true custom work beginning to end, thanks for taking the time to document it.

I really really like the unique design. That was a lot of work and you guys did an awesome job.

Those look great David! Too bad the hardware guy wasn't up to par!

That is Nice work !

Craftsmanship at its best, its folks like you and your staff that keep the rest of us inspired. Kudos

Your level of craftsmanship never ceases to impress me.

You need to say a daily prayer to the woodworking gods that they maintain the finish.

Damn Dave, I think you are starting to get the hang of this woodworking thing.

Very nice! Feel comfortable in letting us know what price range that would land in?

Most impressive. Apparently I'm in the minority, but I think the handles look great. They are unusual but elegant in their own right, and the curves play off those in the door panels.

Say, what finish was used on the doors?

I like the design/shape of the handles (likely logo) but screwing them flat against the panels isn't the greatest and would concern me for issues over time but that's on the handle guy and who ever gave the go ahead.

Thanks again for the comments. Positive feedback form peers is so much more respected than from others.

The doors sold for $15,557.00, with hinges and hinge and deadbolt prep. Finish included ($2200). Frame, install, and handles excluded. All 10/4 pattern grade Honduras (245 b/f), and 90 hours in the shop, 8 hours in drawing, and countless hours in our heads. I budgeted 90 hours, and we hit it on the nose, including all the problem solving as earlier described.

The finish is by IndyCraft Painting (https://indycraft.com) and is Sikkens on the exterior, and is sprayed and glazed. The interior is the same look, though lacquer.

So far, only the valet parking boys have opened the doors from the outside now that the place is open. If they had just used 1/2" steel and eased all the edges, the letters would look and feel so much better. And used hidden fasteners. If they would just put me in charge......

I never understand why different trades/shops arent more willing or eager to simplify and better their offering to the customer/contractor.

Weve had mixed success reaching out to other shops feeding material to a job that we are going to interface with. If I were that metal guy your number would have been the first I asked for to reach out and see if you had any input on how youd like my work to interface with yours especially of it wasn't called out in a drawing.

A 30 minute interaction would have covered it all.

Those doors are amazing - thanks for sharing your wisdom and experience here!

Beautiful doors. The job probably was way over budget by the time they got to the pulls, too bad. Seem like low class pulls.
Guess I can't go there either, don't own a coat & tie. Why would anyone want to tie a gaudy rag around their neck?
I'm headed for IWF this week.

MarkB - Good point. I don't know who the vendor was on that handle, or I would have reached out. I was 'turned loose' on the doors in that I had size and design constraints, but the designer left it to me after sizes and 'woven look'. I don't know what the handle guy was told.

I do know that so many of us have worked for customers that barely afford what we do, such that when someone comes along and says I want your best - they won't say it straight out, but hammer around the bushes. And then we don't pick it up, and do thin and light and 'cost effective'. While satisfactory, we/they could have done so much better.

I tell everyone that I do not 'bid' jobs. I will price what we would do for the job, per our specs and materials, all spelled out in a proposal, to the penny.

The problem I have is that if I contact a parallel trade directly, they get nervous that I'm asking questions, creating expectations, generally nosing around. If they are woodworkers, they fear I might be too critical or worse, or steal their work. Too critical is a legitimate concern, but never to their face or beyond me and my colleague.

The better trades have no fear of this and we meet with them frequently. Masons are OK, interior trim guys are half and half - some much better than others. Electricians are easy, as are plumbers.

Agree on the electricians and plumbers. They are usually all over me when walking on a job wanting to confirm thicknesses and details for box extensions and so on especially if we have been on a job with them before because they know we are willing to do all we can to make their, and our, lives easier and not have a box landing it a horrible spot.

I guess we are lucky in a sense that we arent in such a competetive market and usually our work (wood) is interfacing with a commercial melamine shops, and so on.

You can only do what you can do.