We need to reproduce a hand hewn look on cabinet fronts. Would prefer to gouge into engineer fronts with 6mm solid layer (front and back for balance) instead of solid.

Like this,, Done in Aspire using a fluting or texture toolpath 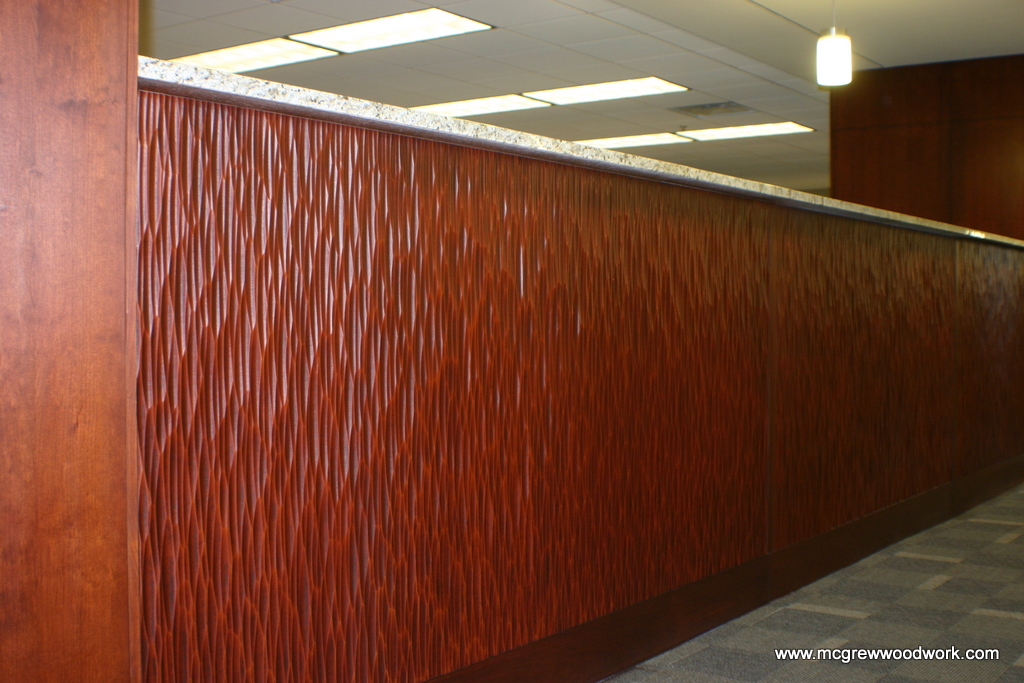 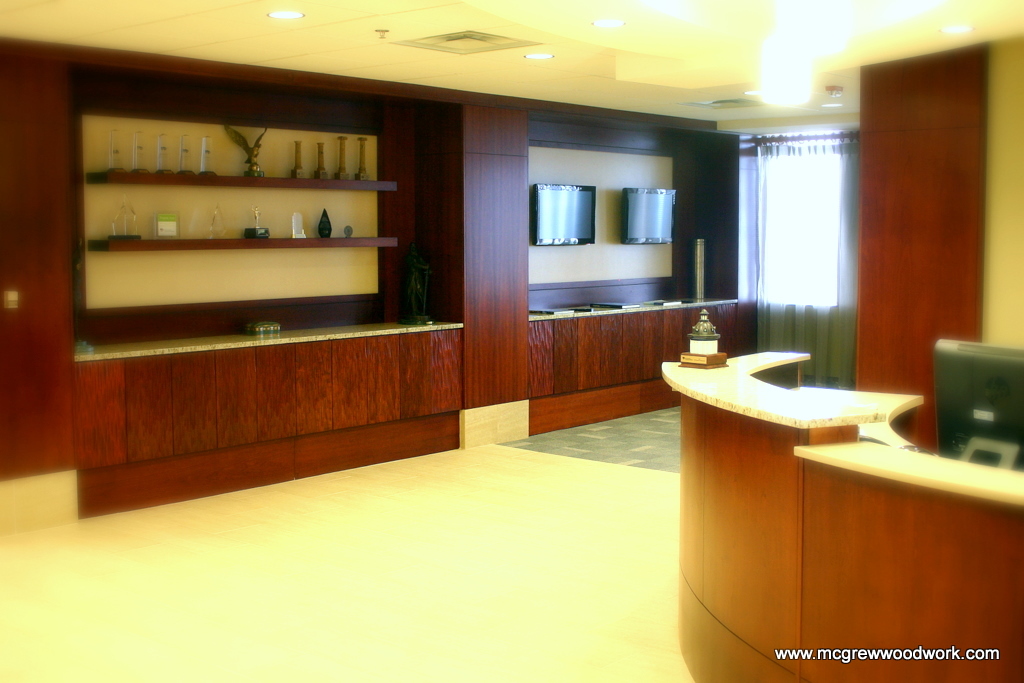 Certainly Wood sells special thickness veneers up to 1/8". I would be surprised if the texture you want to achieve would be deeper than 2mm. It would be awfully convenient for you to lay up balanced panels of existing veneers as opposed to resawing your own.

You might be able to find or purchase a 3d model of the texture you want by searching for "hand scraped wood texture" or something like that. I definitely would do this with a cnc.

I do not think the word 'engineered' is a meaningful word - it is just a marketing term that has overgrown its use. Show me the calculations an engineer did for the drawer fronts.

If you have a source for real wood, and have the equipment and know how to work solid wood, then what is the fear of using solid wood? There is more 'engineering' (of the real kind) that has gone into solid wood than you can imagine. Making wood more useful can probably be the root cause for engineering to become the science it is. State Universities like Purdue have long studied wood as an agricultural component, and the Forest Products Laboratory has a huge amount of information - real science - available to US citizens.

Will those cuts into the wood somehow cause it to warp or twist? Is 'imbalance' inherent in solid wood? How could wood ever have attained its usefulness if we cannot trust a piece of properly dried wood to just lay there and not move around like some feisty 2 year old?

We did hdf on the large divider panels and solid cherry on the doors in the lobby. I did a balance relief on the backs of .25 equal to the " Gouge" on the face

Hand hewing with a broad ax involved scoring perpendicular to the grain, then splitting off between the score lines. Definitely not all parallel lines to the grain. Research the broad ax on youtube. I'd do the texture on both sides of a piece of stock, then resaw it off and laminate to the manmade sheet goods.

I agree with Rich c. I would however add that if you are thinking of trying that method, that most hand hewing is done on green wood. It is MUCH harder x2 if the wood is dry.

Dr Wengert has pointed out several times that drying thin wood is a different creature from drying lumber, in that you will likely have sagging between normal spaced stickers. However I’ve had pretty good results stretching a cable high enough across my parking lot to just hang some 1/8” planks like laundry.
Some soft wood will dry in a day on a hot day.

The example in your link has larger "flats" and is much more random than the example shown as produced by CNC.

I agree with David that this would best be done on solid wood, as the depth in your example might exceed the thickness of any applied veneer that I would feel comfortable using, and you don't have to worry about going through the veneer to the core material below.

I don't know what kind of square footage you are talking about, but if it were me, I would use the King Arthur "Lancelot" chain carver on an angle grinder, and then hit it with a flap sanding wheel.

This will give the randomness that your example has, and you don't need to kill yourself trying to use an adze on kiln dried hardwood.

Its quicker than you think, and somebody has already invented the wheel in chain carver form. Been there, done that.

The problem with the angle grinder or any abrasive method is that it really can tend to rely on the operators artistic eye and their ability or willingness to chase the grain and keep it looking natural. Same with the CNC. The beauty of true hand hewing is you split material off with the grain so the hewing tends to look more natural and follow the contours of the material better.

It all depends on the customer and their budget. Laying up a balanced panel and then hewing away one face is not going to be balanced and Im not sure how you'd handle the edge grain/banding. Would seem a nightmare. Though my guess is the vast majority of todays consumers would never know the difference between one of McGrews CNC surfaces (we do them all the time) and a true hand hewn surface.... Its the makers call as to what they can get away with.

If the customer will pay for true hand hewn I would run the fronts in solids and do it right. If on the other hand the customer is in the 99.9% majority of today consumers who likes "the look" but likes that it can be done cheaper more, than the CNC is the way to go.

I feel Davids pain having watched it unfold for many years less than he has but unfortunately its a hard existence beating yourself against the rocks of changing times.

I would agree that irrespective of ones tooling choice, having a good eye, and the ability to coordinate that eye to a process and skill set, is a good thing to have.

I look at the sample shown by the OP and it looks more like a hand process rather than a machine one, although I imagine if one took the programming time, it could be produced by a CNC with a repeat side to side offset of 12", 18", whatever one feels would produce the desired result and look "random enough".

If the OP's customer has that brochure in hand, and is set on "that look", then one might have to rule out a CNC for the project. That also depends on how deep the customers pockets are.

The one time I needed to do something like this I used the angle grinder because at the time, CNC machinery was only owned by mass producers of RTA furniture, and I wanted something faster than hand hewing.

The angle grinder was cheap, allowed it to be done in-house, and one could go back to fine tune the "hewing" to make it look "more random", if needed, using one's eye to make that determination.

If I had a CNC, or ready access to one, I would sell the customer on the CNC look, if it is not too late. Especially if I had a lot of square footage of this to produce.

Years ago I used to think that lumber core plywood was the pinnacle of sheet goods, and yet at the time I worked with guys who thought that all plywood was junk; no telling what those guys would have thought of MDF. Everything has its place and its purpose.

Dinosaurs like me should not get so calcified in our own thinking that we don't see ourselves being surrounded by the amber.

Sorry for the rant.
TonyF

No arguments from me Tony.

I dont honestly see how anyone could cost effectively vector any hewing on the cnc that would take into account the actual grain direction/flow in solid wood fronts. Would involve importing images of each part and applying toolpaths accordingly. At that point your better off in the handwork as the job clearly has the budget for it.

I would think the vast majority of customers would take the "sell" on the cnc option based on cost and with high quality textures like James has shown many times with his work. That said, even with cnc texture toolpaths, randomization, and gadgetry, the textures can still appear plainly as man-made to some (less and less seem to care about such details though).

Im asked fairly regularly to reproduce a live/natural edge on parts that are S4S and our best solution has been a dense/heavy wood mallet and to pound down the edge material until you collapse the wood fibers to a point you can simply strip them off by hand. They follow the grain contours of the part as they peel off and leave all the natural dips, twists, and fissures, youd see in a "live edge" part. They tear around pin knots and so on. Something that would never be possible with a draw knife, spoke shave, etc.. And its fast.

As you say, the economics of the project pretty much dictate the possibilities.

The trick with the CNC will be creating the artwork. Someone good at sculpting can create a much more random appearance. It is not that difficult to put in your piece size and manually sculpt the pieces to achieve whatever appearance you want. It still will not be quite the same as a skilled craftsman that can look at the grain patterns, but you can get close. It all depends what they want to pay or what resources you have.

One may be surprised at how easily this can be done with a CNC and Vectric software, there are two toolpath methods, one is random vectors using a fluting tool path and the other using the texture tool path feature. I have made some real Hay with this here and there, along with room dividers carved doors, name plates on sailing vessels etc. we are holding a "Camp" at my shop april 23-25 where Vectric and others come to present how to do much of this work. I think the VCPro software is like 5-600.00 and does all of what i do, i do not use #d toolpathing on textured work. 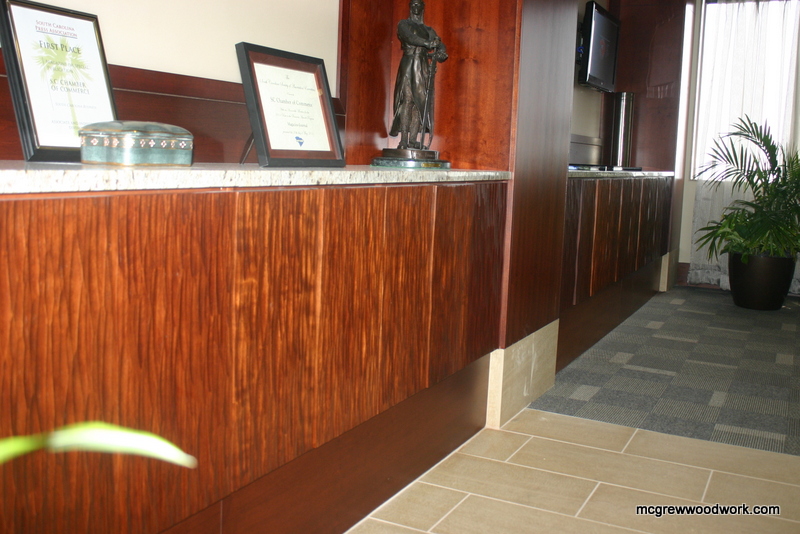 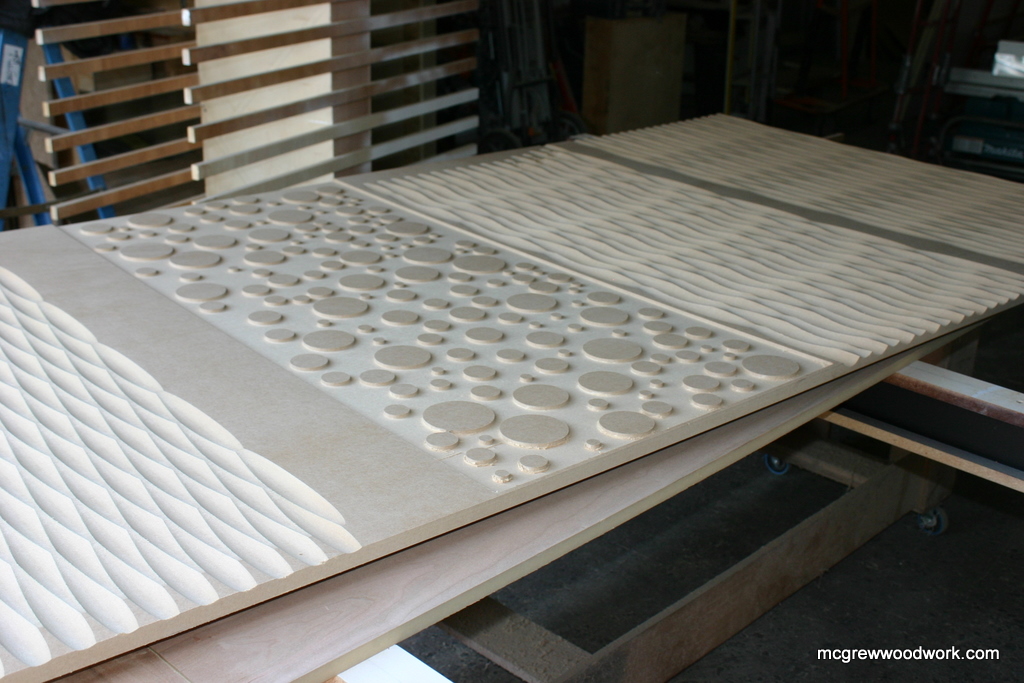 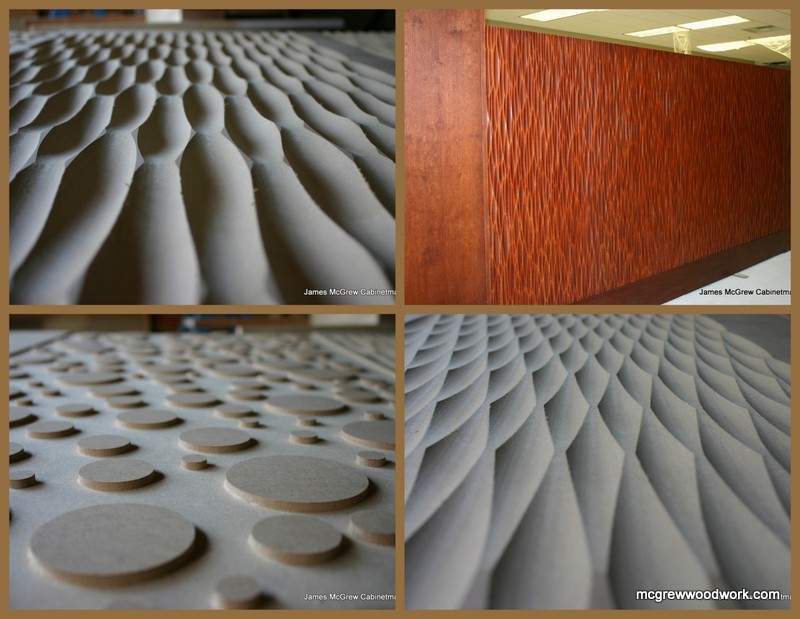