Theft in the shop?

My shop manager came to me yesterday and told me that he thinks someone is taking tools out of the shop. Which might well be true - we have no controls at the doors. It's also possible that the tools are simply drifting around as they get used. We have a very large space (20,000 sf) filled with work in progress, and my guys like to have a lot of tools on hand, each set up for a particular procedure. I hate to say it, but I've never been one to keep close track of our tools, as I've trusted my workers over the years (and have no particular reason to think that this has been a bad idea.) Frankly, keeping close track of each tool has seemed like more effort than it has been worth. I'm talking about less expensive things like cordless drills, small routers, pin nailers. So my question: for those with larger shops and lots of small tools, how do you keep track of them? We were thinking of establishing a basic set of tools that would be issued to each employee, and have their names written on each tool, so at least we could tell when a drill has been borrowed. Does anyone have a system that doesn't require an enormous amount of paperwork and monitoring, and lets you see when something is missing? (I fear that those two goals are mutually exclusive.)

Paul,
Have you thought about just having a spot where the tools "live"? I.E. Paul Akers @ Fastcap. Since I started having the guys sort the benches with a spot for every tool, when I walk thru at any point of the day, I can see what tools are not where they belong. At the end of the day, or even every other day, you can tell if a tool is missing as it hasn't returned back to its spot. I caught that the installers had borrowed a cordless drill from a bench and hadn't returned it when they returned from an install. Asked them about it, turns out that they forgot it at the install. Just a thought.

God awful expensive hammer drills, coving routers and such live in a closet along with all the paslodes. Locked up

We are installing cameras today in both shops

Each bench and station in our shop has a standard set of tools. In all the years one micro pin nailer went missing. It was on a day when the landlord had a carpenter working.... We have a good group of people and very little turnover.
I also sell our employees anything we buy at our cost. It seems to go a long way towards making it less appealing. I don't worry about tools, I worry about supplies.

I had exactly the same experience, I was working as a production manager, brought this to my replacements (I was Leaving) attention and he stated that it was "cost of doing business" that confirmed my many reasons for leaving.
but an allocated tool allowance for each employee specific to their needs and signed for, generally breeds possessiveness over tools, and they have a hard time explaining why they need replacements

We don't install so tools don't get left on site. But they disappear anyhow. We have shadow boards but that doesn't keep the tools from walking out. I keep serial #'s and an inventory and each power tool is engraved. Tools for each bench are color coded and engraved with the location. On a good year we only lose about $600 in tools, many years it is much higher. The cost of having employees!

Do you guys have employee manuals that spell out that theft is cause for immediate termination and will be prosecuted with the police? Just wondering if this is actually a deterrent or if no one reads the manual anyway...

I don't know if this will help, but it might.

A local business journal many years ago ran an article about the day Boeing Airplane Company moved it's last employee owned tool box off the floor.

It used to be that workers all had their own tool chest and with that came a lot of autonomy as to how many and what kind of tools were in the chest. Some guys were fully equipped and some guys just used their carts to hold spare clothing and potato chips.

Whenever one of the minimal tool guys needed something they would borrow it from their more well equipped neighbor. Inevitably some of the borrowed tools ended up missing or damaged and when this happened the guy who owned the tool would go to management for reimbursement. Essentially the company actually owned these tools but the custodian was in control of them.

This led to a lot of inefficiency and extra labor. The tool chests would get locked up in a special protected area every night that was some distance from where they were being used. Boeing had to pay the guys to push the tool carts out to the work district each day and push them back to storage at the end of the day.

There were also some liability issues associated with workers using worker-owned tools. A missing hammer could easily go unnoticed if it was privately owned and randomly stored. There was no real way to know if a tool was left in the fuselage until it started rattling around in-flight. Boeing solved this problem with shadow boards. Nobody could go home each day until all the tools were on the board and accounted for.

The take away from this would be to furnish ALL hand tools. This way you can color code them by department so they are easy to put away, you can be in control of how sharp they are and what quality level you want to use and more importantly you can have them exactly where you want them when you want them there. 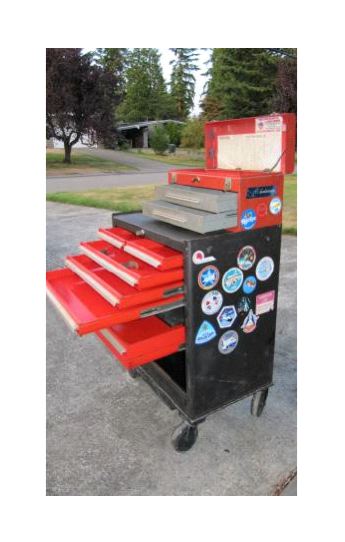 We use shadow boards & shelves, we take pics every week with a cell phone camera to compare, we install very cheap IP Cameras ($40), that record movement directly in our hard drive server, with a simple ip camera program, it’s great because you can put how many cameras you want, and every time you want to check a specific area you can add one, when something is missing in a specific week, we just check the cameras, also is great to check what’s happening in the production floor, just with a click of your mouse you can see everything; even in your Iphone, production level when up, since the workers fill you can check on them any time. We just configure our cameras program to send an email & text message off hours when it detects movement, so is a great alarm system too, very cheap system. I spend $400 for 10 cameras and $45 for the program, is very easy to install, we did it ourselves, the cameras are wifi, our shop is large so we just use Ethernet cable 5e, just add an Ethernet switch where you need it. Hope it helps, any question just send me an email gladly to help my friend.

Carlos can you tell me more about your camera monitoring system. Who makes these where did you find them, distance and field of view.

just bought an eight channel on amazon.com
for 300.00

Carlos: thanks for this. Can you post a link to the cameras you bought? Can you tell us the name of the software? I could message you, but I think a lot of people would like to know what you used.

I bought Blue Iris Profesional ip camera software, I think cost me $40 with a coupon I found on the internet, I love this software, because it works like a dvr, I can access remotely any computer in the office, from my house or cellphone, I can create different users to access different type of cameras, very easy to install, on eBay I bought several IP Cameras for $40 or less, the beauty of the software you can add cameras along the way as manu you need, you are not trap to a 4,8 or 16 camera system. One mistake a did I bought 4 ip cameras were you can move, the extra cost is not worth it because I never have the time to move the individual cameras, just buy the bullet outdoor type, all the cameras have sensor motion movement, and the software detects it and records to the hard drive. I will post some and more information tonight

Paul,
Keeping track of the tools may seam like more trouble then it is worth to you because you see it as a percent of the operation. The router, nail gun or what ever else is walking away is a big deal to your guys or it would not have been brought to your attention. I know we hate to think of ourselves as the boss and not one of the guys. But that is how they see us. I think you need to call everyone together. Put on your boss hat and tell them how upset you would be if tools were actually walking away. Explain how it hurts everyone and so forth. If after the meeting you get a name, you will have to dispense some sort of punishment. I know it seams petty, but sometimes we have to be the bad guy to one to keep the morale up for the rest of the crew.

Matt: I did exactly that yesterday. Thanks for the reminder. Nobody has been turned in (yet) and it's possible that the theft has been done by a cleaning crew that cleans our hallways. We're on the 4th floor of a large building, there isn't street access, but it could certainly be the cleaners.

Nice. You showed you are concerned and hopefully you don't have to pursue the matter further with your guys. The cleaning crew does not affect the shop morale so it does not matter how that is handled.

Thought I had posted this, but I had a client that we wholesale lots of boxes to return some screw guns and smaller boxes of screws, hinges and plates

Don't really understand how the assembly guys leave the items in the cabinets, especially if they are placing the adjustables shelves