One of my customers was complaining to me yesterday about how slow the carpenters were proceeding with the installation. I told her, as I tell all my customers, that before they start their job they need to be prepared to accept a lot of inefficiency & what might look like un-professionalism.

I tell them that if there was some way to codify this industry Amazon would have already figured this out.

I read in the WSJ last week about an upcoming 3-day conference Amazon was hosting for people who manufacture the items we see on the grocery shelves. The purpose of this meeting is to discuss what kinds of packaging will be necessary in the future. Rather than merchandizing Captain Crunch in a battle with the Corn Flakes Chicken they might want to be considering how to produce a cardboard box that can ship to the customer in two hours.

This particular packaging caught my eye when I was at the grocery store yesterday. As you can see, they use a wonderfully enticing image of an avocado to sell you salad dressing. The fine print, however, says there is absolutely NO avocado in this salad dressing.

We could segue right here into the Trump administration but I think it would suffice to say that the landscape in front of us is changing. I see a blue ocean strategy here. 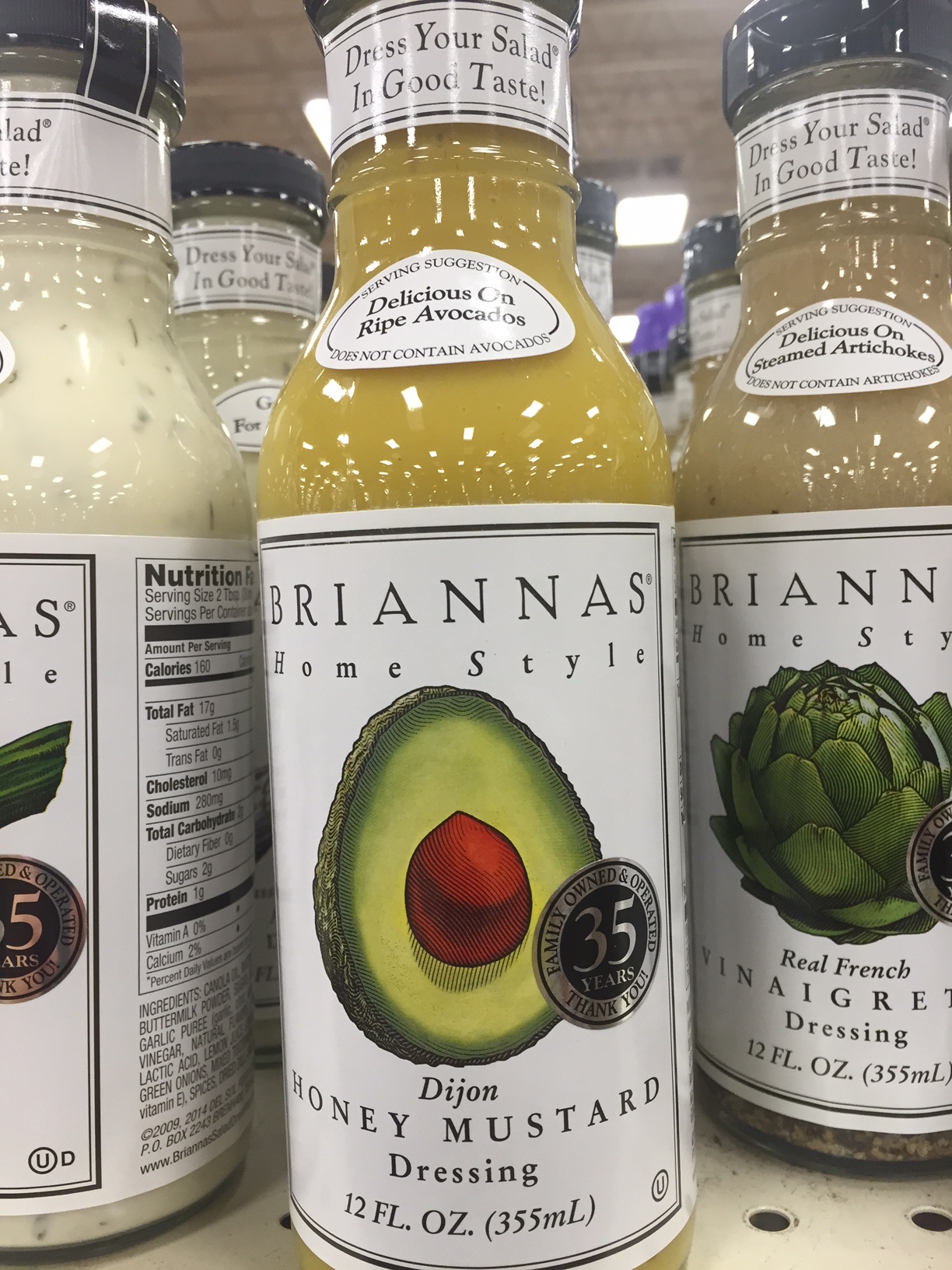 Did I miss the part about Amazon selling cabinets?... :-0

I think you think this is a blog. Look it up, its not.

I remember doing a job about ten years or more ago for one of the top guys in Costco. Another contributor at this forum also worked on the same house. There were three cabinet shops involved. Back in those days the jobs were big enough that involving several shops was a fairly common occurrence.

The CEOs of similar organizations all had quarter million dollar kitchen projects underway. The price point did not go unnoticed so they tried to figure out how to get a piece of the pie themselves. I don't know if anybody recalls but even Sears dabbled in a couple of appointment only showrooms. They had massive purchasing power selling Kenmore ilk appliances but wanted to leverage higher dollar appliances.

The project was short lived. It could have had something to do with the economy turning down and the overall complexity of trying to herd cats.

Amazon is nibbling their way in by offering to recommend a quality plumber to anyone looking at bathroom sinks. Soon we will no doubt see a service called "Prime Plumber". With the Amazon warranty and delivery speed they should do very well with this. Soon all plumbers will have to compete with "Prime Plumber".

Eventually all plumbers will be "Prime Plumbers".

Brick and mortar grocery retailers are working on customer recognition software, facial and other so when you come into the store they can present you with deals specific to your history, in the same way all the online retailers present you with offers based on your browsing and purchasing history.

We had a customer that wanted to brink Fixtures in from SE Asia about 15 years ago, they finally did it last year.

We have a customer that the order entry from their dealers is fed right to engineering and its reviewed and then customize /produced. A front end that can feed production ready data to a mfg. is all Amazon needs to get into the Custom Kitchen cabinet business. The problem is there are too many tactile experiences in the sample and show room process.

Were you aware that Amazon is opening brick and mortar Book Stores? We have bid on a few in the last 6 weeks.

The whole sales process and order process is changing, the online sellers have grabbed all the low hanging fruit, now they are onto the next steps.

I have done the Cabinets for 3 Amazon facilitys two large distribution units and the most recent is absolutly a money maker,, they are now publishing , printing and shipping books to order,, No more dead shelf inventory, Will this happen for some forms of Cabinetry,, yes it will in fact it has been here for some time,, I try to sell talent and custom, if you want to be in the production line or supply chain then so be it, it is here but i have little fear it will put our entire industry OOB, 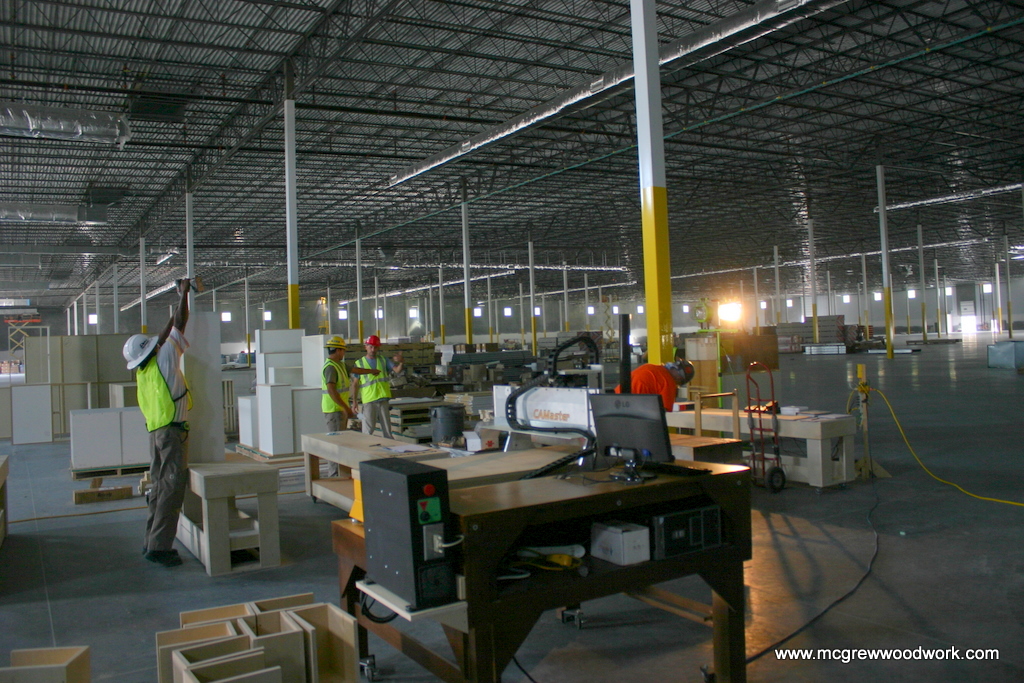 There are several reasons I pay a lot of attention to Amazon. The first one would be that my shop is located about two miles from their worldwide headquarters. As such, a lot of my customers come from there.

The second reason is that I have discovered, from personal experience, it is very easy to become irrelevant if you don't pay attention.

I would guess most of the people on Woodweb were around when this new thing called FAX machines came into the office. It didn't take very long for this to revolutionize how we communicated. Only a couple of years or so. I don't even own a fax machine any more.

I can't remember which came first, email or cell phones but they too did not take long to become a part of standard business practice. The day I could email a color coded PDF was when technology started to really make a positive difference in my work day.

Several years ago I posted a question on this forum about what constitutes "Yellow Flags" in contingency planning. I had read a book by William Lasher where he described the typical life cycle of an entrepreneur. His thesis was that for most entrepreneurs "there are no problems, only opportunities". As such this fellow can't recognize a problem when it is on his doorstep. "Problems" don't exist in his world.

So he sleeps through the first problem.
Eventually he notices water seeping under the door and actually wakes up to what is happening. He then goes into panic mode trying to think through possible strategies. It takes a while to come up with one but eventually something takes shape and gets implemented.

Phase three is when he waits for the outcome to show up.

These three time cycles are enough to put him out of business.

This approach is no guaranty of success in turbulent seas but just the act of compressing his time frames down to one instead of three helps greatly with his odds of success.

Back then the problem was too much work (kind of like the problem today). A very smart participant in this forum named Ron Magnano postulated that one yellow flag would be if you receive more than 50% of your work from one source. It doesn't matter how healthy the source of work is, you are putting too many eggs in one basket. I took note of that.

At the time I did 80% of my work for one contractor and furnished probably 50% of their casegoods. They were growing like gang busters so prospects looked good. The problem was that they were adding project managers so fast I didn't have time to build enough relationships. These project managers came in from other contracting companies and already had their favorite vendors. I went from being buried in work by this contractor to not having a new set of plans to bid for 8 months.

Fortunately I had already implemented Mr. Mangano's advice and had other eggs in the basket.

However, I am very much against his upthread post about the low entry of barrier and the chaos and inefficiencies that brings to a project.

Which is why I'd be an idiot to not notice the sears, Costcos and eventually Amazons trying to take over the space. But I believe it is simply an opportunity not a problem. My clients want someone who understand every end and out of the many different aspects of their job- which take a person years of experience to get and do well and cannot be learned sitting behind a screen by someone making $12 an hour. They want someone who will not answer their email with an automatic reply but listen to their dreams, wants and concerns and then pull together materials and finishes from a wide spectrum to fit their specific needs. Something amazon can't and doesn't even want to do. That inefficiency is only in small part due to the low barrier of entry and far more to do with ) client inefficiency 2) complexity of jobs 3) regulations. All three of which amazon does not want to deal with.

Even if you get away from the customer service and skill end of things and just get down to price they really aren't less and often times more. Because they can get it and because of their huge overhead.

They will get the convenience shopper who wants things now and cheap. And they can have them. Makes my job easier and not harder.

I would worry far more about our debt taking out our way of life then the amazons built upon the very same house of cards.

James, are you building cabinets on site?

No, we were assembling those distibution centers were HUGE, and came when the shop was crazy busy, on that one we outsourced to cabparts and did the ss tops onsite,, the break rooms were to seat 1000 people at a break

Amazon will do what Amazon does. Sell cabinets? Ya, small and easy to handle. Take over Ikea? Hopefully! Yet I doubt it.

If your a Custom Shop, they won't effect you. If your a Big Box Store supplier, then they would, but you've already been challenged by over-seas/out of country purchasing.

Waste of time and effort for Amazon to even step in.. MHO.

There were three cabinet shops involved. Back in those days the jobs were big enough that involving several shops was a fairly common occurrence.