I am bidding a job over 1300 miles away and am contemplating crating the cabinets and shipping them there. I do not have the capacity to haul all of them and our tools in one trip. I checked on renting a large truck but it was about $2500 one way. Wondering if anyone has ever used a freight company and what the results were such as cost and/or any damage. They will be pre-finished and I won't be able to do major finishing repair on site. Thanks

Try ship smart. They will come to your shop and pick up, crate and deliver. Don't know how much it'll cost though. I've used them for one furniture piece only

Don’t have any cost information, but at one shop I worked at they would use Bekins Moving Company, they would drop off a trailer and a pile of moving blankets, we would load the trailer, then would deliver it to the job site. Once we un loaded they would pick up the trailer. ABF freight company also does this, drop a trailer for you to load, then move it to job site.

There is also a company I think is called uship.com you list what you have to ship, from where to pick up and where to be delivered, then people will bid on how much they will charge. As prices start coming in the cost will drop, you then chose who you want to do the job. I had a motorcycle moved this way after buying from eBay. This outfit was also featured on a reality TV show for a few seasons.

The company I worked for in Salt Lake used Godfrey Trucking. Like Jim's situation, they'd drop off the trailer with blankets and straps...we'd load our items and tie them off. If I remember correctly, the average cost was $1700-$2100...but that depended on final weight and distance. All our items were finished before we shipped them, and we shipped as far as Maine.

The only time we had an issue was when our solid surface sub used clamps instead of straps on one load. They fell over in transit. Other than that, there have been no serious issues. Rough guess on the number of loads would be 50+ over the past 8 years.

Godfrey's was also willing to quote the cost of the load beforehand, so we could add it in to our proposals.

The nice thing about uShip.com is depending on your load size, you may get someone with some open space in their truck or trailer, and already heading the same direction your product needs to be going, and to fill their load may give you a really good price to move your product. Helps cover their expenses on a small load.

The driver that delivered my motorcycle for example had another one at the back of his truck that was headed to Santa Fe about 65-70 miles north, then was continuing east with 2 other stops, 1 to pick up additional items and the other to drop off the bulk of his load. Price I paid was about half the cost of the next closest price I was quoted. Good deal for me, good deal for the trucker.

Thanks to all of you. This helps a lot. I should be able to come up with something out of all these leads.

Hi David - when you call for bids on trucking it is called common carrier. I am a small shop but have shipped by common carrier numerous times. My experience is you need to make it bullet proof. Attached is the way I do it and can sleep that night, knowing it is going to make it. First I do a quick sketch on how I plan on stacking everything so I can either make a pallet or have a crating company make one for me that will be a couple of inches bigger than I need. Your not limited to standard sizes. Next I wrap everything and I screw cleats to top and bottom of cabinets and screw everything together so it acts as one unit.

When I get done, I box it with 5/8 or 3/4 cdx plywood. On the sides where the fork lift doesn't need to go under, I run the plywood to the ground and screw it to the pallet.
I calculated that between labor and materials I need to allow $500 per pallet to get it ready to ship.
The job you see in the pictures went from So California to Lexington Kentucky - Shipping cost $1800. 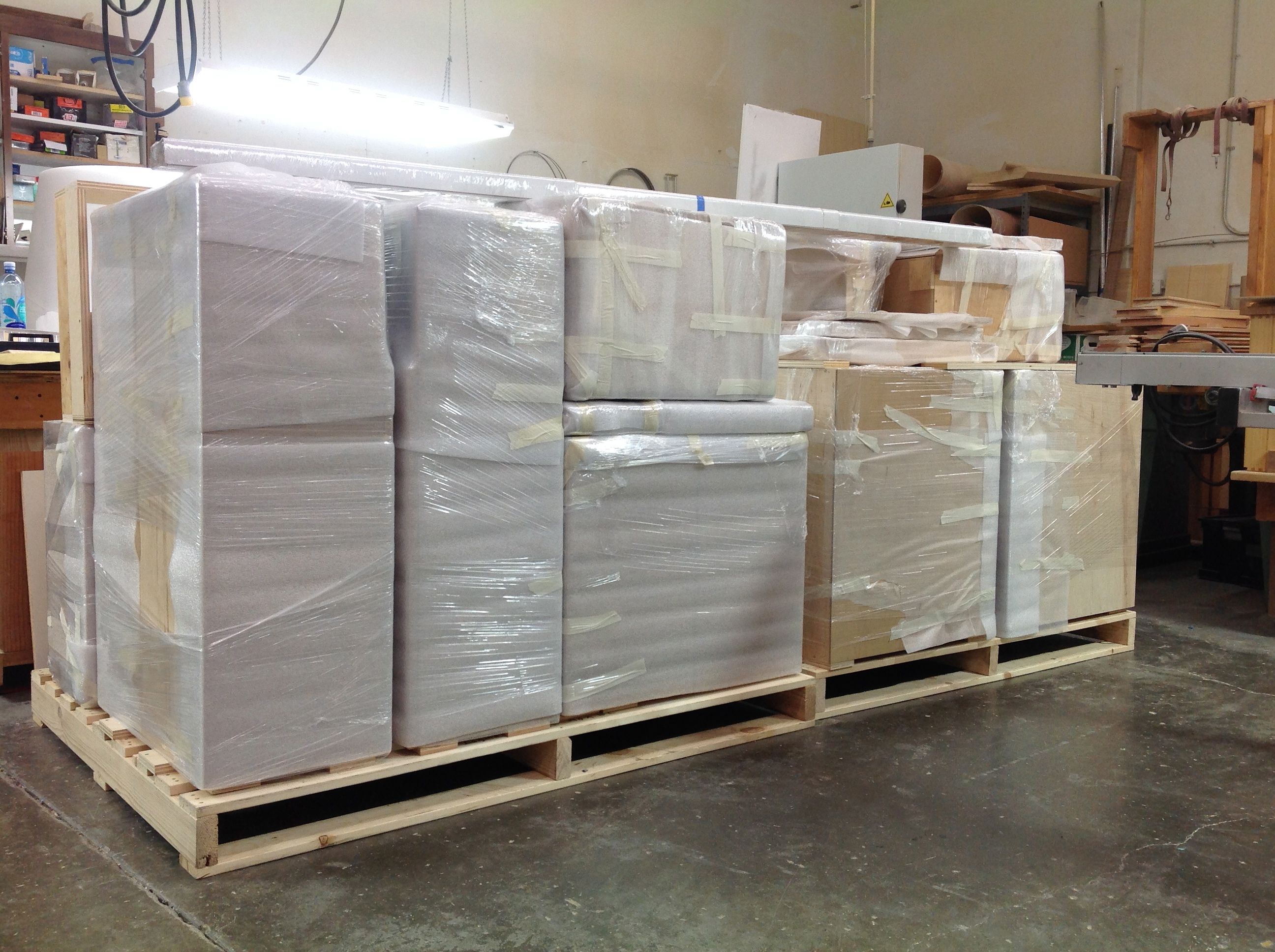 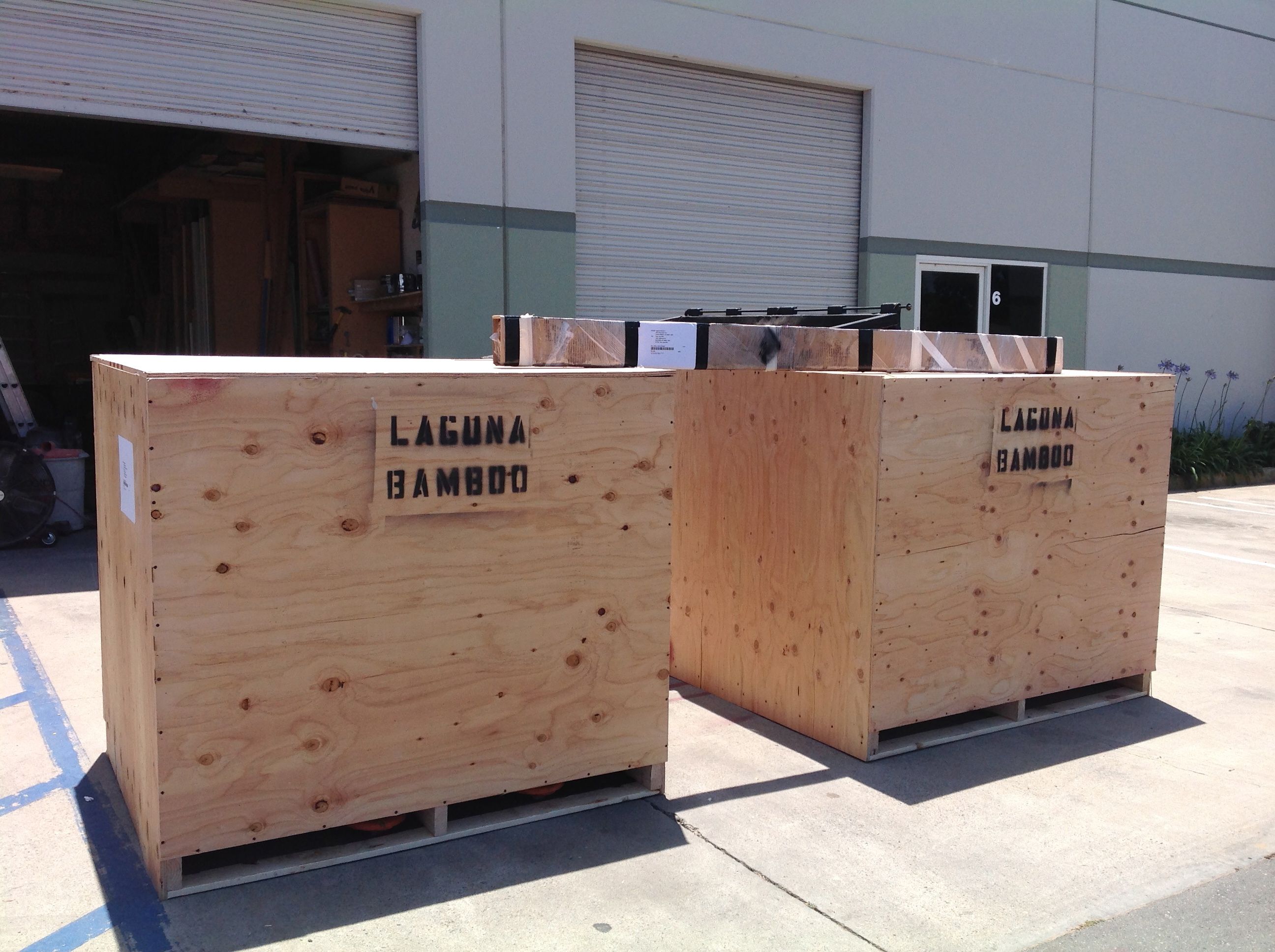 Thanks for sharing this Richard. You provided the other parts of this puzzle I needed. The pictures help a lot as well.