I have a question about finish.

We built this walnut piece about 6 years ago. The finisher on this project used the cheapest nitrocellulose finish he could find. It was basically just one step up above hairspray.

The customer would like to refinish this himself and is looking for recommendations of technology he could handle himself. I told him that a brushed finish would produce a patina that could endure and would be easy to maintain. I wish they would have done something like this in the beginning.

The finish protocol I have in mind resembles one I saw many years ago. The finishers sealed Douglas Fir baseboard and casings with benite then applied a very dark brown stain. They then shot two coats of nitrocellulose on it to produce build. All of the finish at this point was produced in the carport.

After the spray was dry the carpenters chopped and installed it. They used colored crayon putty to fill the nail holes. After this was done the painters back brushed 2 coats of SPAR varnish onto the finish. The critical part was the varnish. It was not a self-leveling kind. Any brush streaks or high spots that were present in the first brush phase were still there after the second brush application. The second coat did not meld with and flatten the first coat.

The final effect was something that looked very very old. It was like what you would expect to see in a lumber baron's house built at the beginning of the last century. It looked like it was in a room that was produced 100 years ago then closed to the public.

I don't think this is ever going to look like a new piece of furniture again. I would like to see it made a little brighter and the walnut to have a little more luster.

Can anybody recommend a brush-able finish that a civilian could apply? Would optimally like to have something that is not "self-leveling". Would like to maintain the "aged" look. Any suggestions? 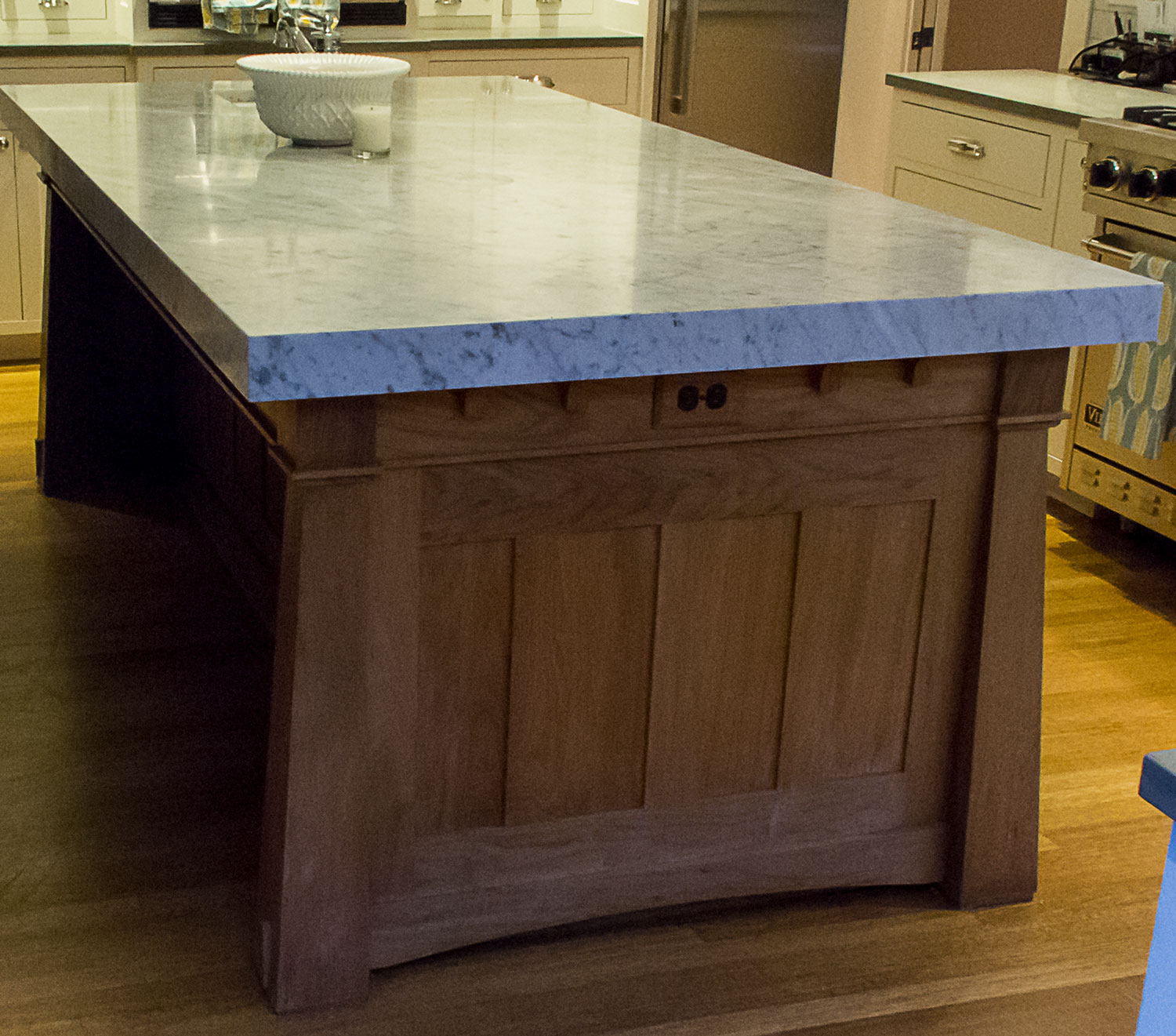 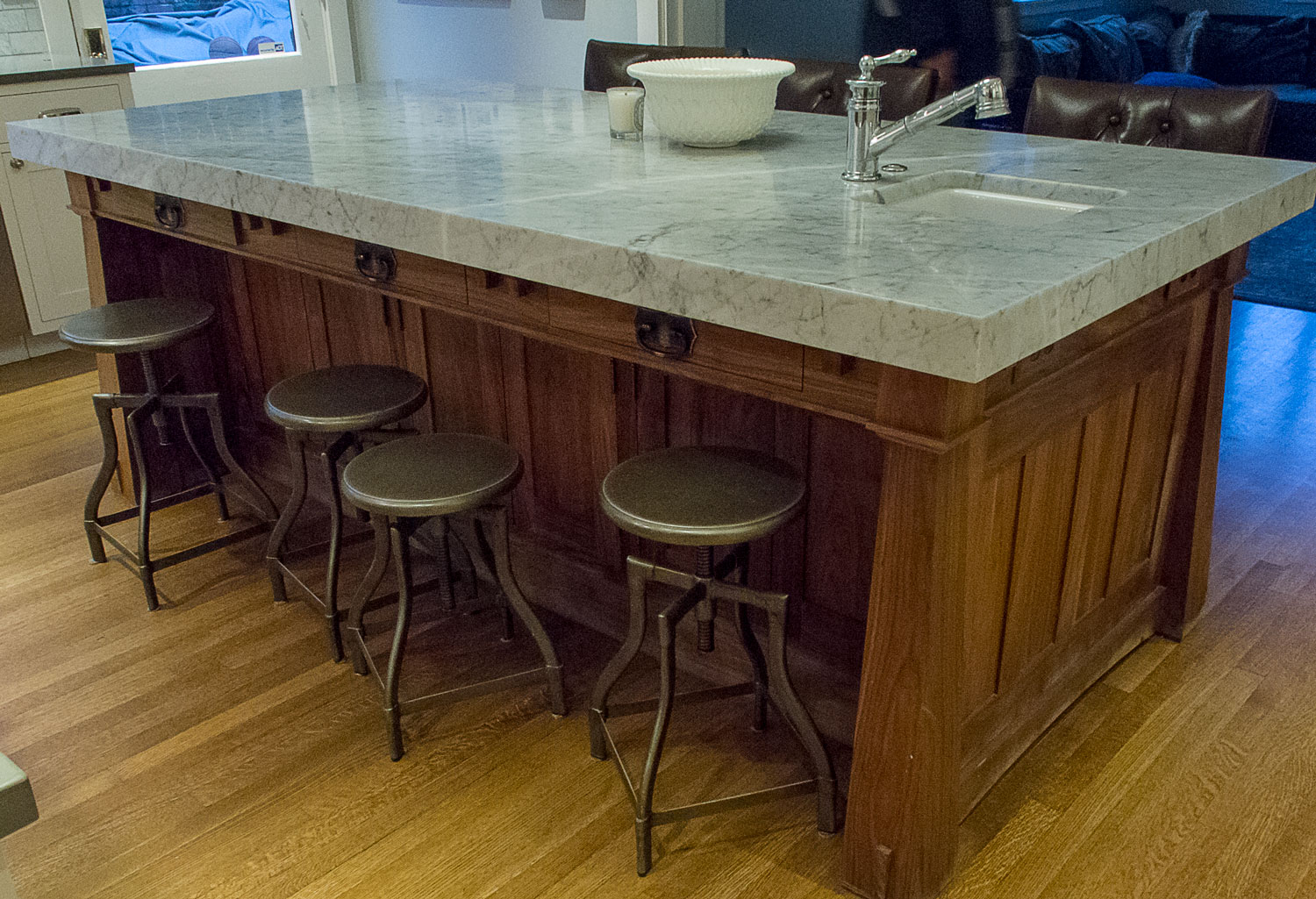 I'd have them scrub it with TSP, scuff sand it with 320, then use Waterlox. They should test the Waterlox on a hidden surface to check compatibility and adhesion, but it's very easy to use.

No recommendations on the finish, but that is a beautiful island.

I am with Paul, sometimes if it Ain't Broke...

I also can't help on the finish. My people want 'new' for the most part.

Thank gawd for not running shoe mold around the island/floor. That is one of the more abominable things even the 'high-end' guys around here still do.

The thing with the older type lacquers is that they will turn milky and flake off with repeated contact with water. I would also wash with TSP, but be careful as it will eat the finish, and your skin. That takes off the dirt and grease. Apply new lacquer on damaged lacquer and it will melt the milkyness back closer to original. Sand lightly and apply Polyurethane. touch up color between coats.

I agree with Rich; Waterlox...but tell the owner a beautiful piece like this island deserves a professional refinisher.

You can also have him use Deft brushable lacquer. Usually available at Lowes or Home Depot. Just tell him to get satin or dull sheen, not gloss, or that gorgeous island will turn into Looney Tunes.

Agreed with the idea of cleaning with TSP first, that is a very good start.