We recently added a new Night Stand and Hope Chest design to our line of furniture and three of the pieces came back to us for failed glue lines on some of the trim pieces (see pictures attached). We used Titebond ll and kiln dried red oak that metered out at 8%. The joints were tight when lacquered and we have not seen this on the vast majority of other pieces. Any ideas as to why these particular joints failed? 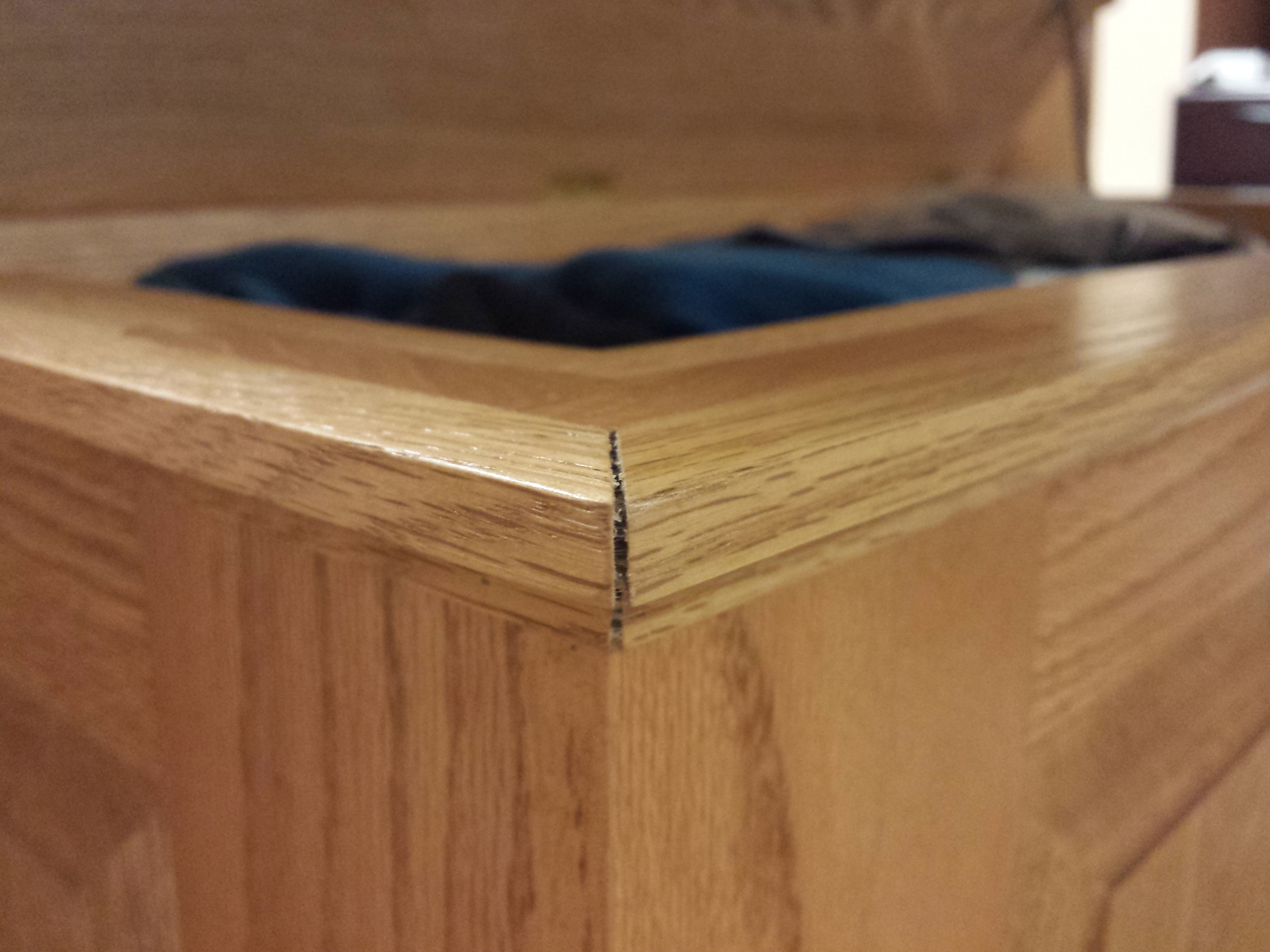 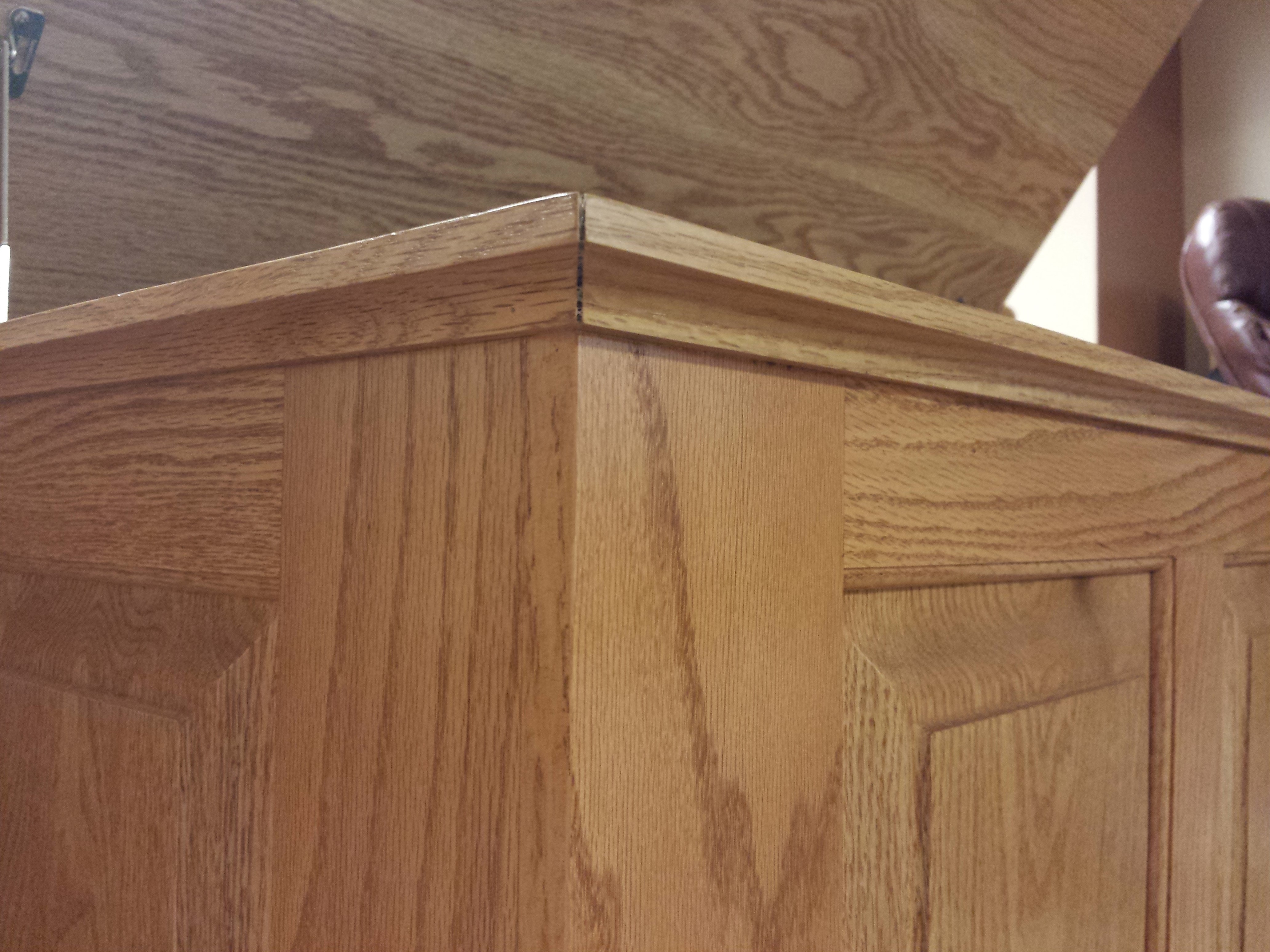 I cannot see how the deck is made, or grain, or solid or veneer or ?

But, the two vertical stiles coming together will make for - what? about 6" of cross grain construction all together? With flat sawn Red Oak, there will be movement, and that 6" may be enough to pop that miter.

That is about what you see there, no?

Yep, is the top built like a raised panel door or is it just a slab? With widths like that you need room to move.

Not wishing to be unhelpful, but that is not a "failed glue line" nor a "joint failure".

It is the stiles at the corners that caused the miter joint to fail. The width of the stiles as well as being solid wood is enough to cause the Oak to swell with even the slightest amount of moisture or temperature increase. Try to either make the stiles out of plywood and edge band the top and side edges (or miter the side corners instead of edging) or attach the trim to the lid with a little gap around the base to allow enough space for the wood to move. I think attaching the trim to the top will help the most. I also like to spline 45 miter joints to add extra strength. That seams to be the one spot that fails the most.

I am going to slightly disagree with the other responses due to that if the wood stiles on the front and side panels would move that much to cause the miter to pop open wouldn't we see separation from the two panels at the joint? Or the rails from the stiles, or even the glue joints on the top at that. The carcase and bottom of the top in picture looks really good, so I'm wondering if the wood for the moulding was not prepared properly or had stock moulding bundled together and the piece of moulding used was badly bowed or twisted. That would cause extra stress to the wood moulding to apply a lot of pressure to close the joint tight. Then it would be constantly pulling away with just glue or nails trying to hold it in place. I could be wrong but that's my input.

Thank you all for your input.

I think what I will do is reverse the order of the stiles and rails so that the stiles are inside the rails (in effect, turning the entire panel 90 degrees thereby eliminating the cross grain stiles at the ends) That way the trim will run long grain to long grain all the way to the edge.

Do you foresee any additional problems with this solution?

That will fix the problem. The only issue I can think of is it may look a little odd, so do a sample to see if it looks good.

I like the idea of letting the rails run to the ends.

But if you want to keep the styles full length, I'd use QS or rift, then reduce their width down to equal to the mid styles width, both of which will cut the movement by half each.

Historically, when moldings needed to run across a surface at 90 degrees to the grain, they were made with a male dovetail to fit in a slot in the case side. Where the miter met another piece, the molding was glued or nailed or both. The other end was left unglued to float. This allowed the case side to come and go, with the molding held tight to the case by the dovetail, and the miter secure.

A modern alternate would be to make the top out of stable material, miter the mold around the rim and set that on top of the case side ends, with filler blocks behind the molding, flush with the bottom of the cove. This would allow the case to come and go, but the stable top and molding attached to it would stay tight.

A second alternate is to attache the molding to a stable top, with clearance between the back of the cove and the case. Use your access to scientific design tools like the shrinkulator to determine this clearance.

If you have a traditional style to your case, then it would bastardize the design to switch stiles and rails, and perhaps move you problem somewhere else - like inset doors?

The best lesson I ever had was to think of 3 viable solutions to any problem before choosing one.

It is a shame when miters seperate. I think wood movement perhaps from drying is your culprit. I agree with someone above who said do it out of ply with oak veneer or better yet out of MDF with oak veneer. I wonder if tight bond isn't the best glue. I use TB2 sand and glue all my trim miters thouroughly, nail them well, and still sometimes they seperate a little over time (Years)

The classic example of this happening is a porch post. The square 3 1/2" x 3 1/2" post is pretty dry when installed. Someone spruces it up by running a scotia around it. Guess what happens when that post slightly grows with humidity. 1 or 2 of the miters opens.

The moulding has to follow the grain. The two options are to do your original change (turning the paneling 90 degrees) or you need to make the top with the moulding attached and then fasten it to the top of the paneling as built.

Without knowing the exact construction I can't say what's going on.

If you are trapping the stiles with a molding, no amount of reinforcement will keep the joint from popping, you have to re-engineer it.

I'd keep the grain direction the same, otherwise I don't think it would look good. Can you float the top?