Sanders at the bench

Hi everyone, looking for a little feedback.

We are a small shop, 9 guys on the floor.

Right now we use 5'' random orbit sanders and a down draft table. However, if the sanding table is busy or someone has left their stuff on it, the guys then sand at their bench . As you can imagine this creates alot of dust.

Do any of you have the festool power sanders at the guys benches? And how does that work?

My concern is that the festool wont yeild a good enough finish. Or wont "grind down" marks like from the wide belt sander. Am I wrong?

Mirka Ceros here with collectors on each sander. As close to zero dust as you can get and as close to a dynabrade as you can get with the bonus of no costly air to run and a hell of a lot quieter.

My concern is that the festool wont yeild a good enough finish. Or wont "grind down" marks like from the wide belt sander. Am I wrong?
Yes, been using Festool sander for over 10 years now, they do a very good finish and yes they can "grind down" the wide belt marks, we have 4 sanders with the vacuum and it is 100% dust free, also ours have the option of orbit for finish sanding or polish spinning mode for fast material removal.

At my last job we used Dynabrade air sanders with a vacuum hookup which was pretty effective. The air sanders are light and last forever if oiled regularly.

Now I use a Festool ETC EQ 125 5" ROS and am very happy with it. The dust collection is the best I have seen and the "form factor" is as close to the Dynabrade as anything but the Mirka, which is a couple hundred dollars more. The performance is equally good, and the electric sanders don't require a 5 hp compressor to power them.

One counter-intuitive thing I did find with the Festool was that I had to dial back the suction a bit to avoid swirls.

In my opinion, I would stay away from the festool for cabinets. They leave a terrible finish and scratch pattern....at least mine does. I've got the cheapest sander they make (which isn't cheap at all) and it sits in
the cabinet while I use a much cheaper Dewalt or Makita with 10x the results. I can never get the Festool to not leave terrible swirl marks.
I will say the dust extraction for them works very nice. Just not a nice enough finish for me.

We use dual function 6" Festools with their vacuums at the benches and there is no dust from them. They are fast to remove stock and fast to fine sand to go to the finisher. We also use their discs. We tried saving money on other discs, but they did not last long and left scratches.

The 6" is smart for the extra surface and stability.

You can turn off the sander and the vacuum runs for 30 seconds or so to clear the lines, The suction is so good the sander will pick up a small part just from the suction.

JeffM, If you havent already I would suggest looking closely at David, and Kevin's posts with regards to collector suction. We dont run any Festool's but every single issue Ive ever read about with regards to Festools sanding quality or scratch pattern has been to do with one, or both, of two things. Too much suction pulling the sander too tight to the work surface and therefore reducing the oribital action, or #2 too much pressure from the operator resulting in the same condition.

For a time I worked for a company that sold Metabo tools. They pretty much innovated electronic tools. Tools that ran on 90 volts and saved the remaining 30 volts to be applied as load was applied to allow for constant speed.

Well, Metabo about quit selling electronic tools in the US because tool users were so accustomed to thinking the tool was working if it was bogging down. An electronic tool will not bog down until unreasonably excessive load is applied (which will be close to the point of the tool catching on fire) because the tool holds back 25% of its power to be applied as you lean on the tool.

I have watched festool rep's mark the pad with a sharpie to show the user when they are either stopping the orbit with too much pressure, or too much suction.

Mirka Ceros has been discontinued. I had major problems with 3 of them and now finally have one with no problems and they discontinue them???

Been using several (5) Festool sanders, a few Mirka's (air and electric) and others, all with vacuum hookup to three Festool vacuums in my 3 man shop.

We dont have issues with swirl no matter what sanders are used - I feel its technique, set up and brand of paper.

As far as dust goes, there isnt much that doesnt go into the vacs. Huge difference from sanding without vac hook up. Huge!

Once you get used to the vac hose, you will never go back to non vac sanding IMO.

I also preferred pneumatic sanders until we invested in some of these "better" electrics. Still use a few air sanders for finish sanding between coats of lacquer, though, as they seem to work better for that IMO. But they have vac hook up too.

Well, either I have a much higher sanding standard than most or I have a broken sander. I can get a better finish with any sander than the Festool I own. I have used multiple papers including both mirka and Festool on the Festool. I've used the Festool paper on cheaper sanders and still better results. I've used no suction, full suction and in between with the same terrible results. I know it's not technique as I've been doing this for over 20 years and can get acceptable results with any other sander. The thing is, I like how it sands and would like to have another the next size up but am terrified of dumping that much money in with the results I get with this one.

That's ironic Jeff, the festool sander is the only one I DO NOT get swirls from. I've tried all the major brands, higher end sanders with good quality paper. Most of which have left swirls. Festool, for me, has been the best

Like I said....there must be something wrong with it. It has been factory repaired once when I first got it for not oscillating. It must not be right. I have makitas, bosch, dewalt and porter cable that all leave a better finish.
What festool paper are most of you guys using on flat cabinet parts?

I too have festool. 2 of the 6" Rotex, and now the DC powered 6" ETS. Excellent machines, excellent results for about the last 8-10 years. My old Hutchins and National-Detroit air units are put away for good. I never want to deal with that level of dust, noise, or power consumption again. At least as good a finish as well.
I run the Klingspor paper after giving up on the poor life and high cost of the festool brilliant line. Better value.
Jeff, do you have a Rotex? If so, and you had it on grind, and the side of the pad hit and jammed against a vertical part off the horizontal plane you were sanding, it is possible to deform the plastic disc backing causing erratic sanding.
There is some kind of issue with your unit for sure.
I also run mine at full speed, and full suction all the time except for between finish coat sanding which I dial back to half speed

Thanks everyone for the feedback. On what has helped and worked for you.

To let everyone know, we had an electric festool 6'' in our shop for a week and a mirka 5'' air sander with the vacuum bag.
The mirka for us was the better fit for sanding smaller items. The guys were concerned how tired they would be after spending hours using the festool. Both were great machines and either would fit well in a wood shop.

For my money I use the Fein MSF 636. A 6 inch, with their turbo vac. Stout machine, I have 3 and have only lost one to a part failure in over 10 years.

They make the festool look like a joke (Which it is in my book). You can run it one handed and with a few weeks of practice can sand 99% of your parts with it.

Just so you guys don't think I'm crazy. Here are some photos of the terrible swirl this festool leaves. 180g festool paper, very little to no pressure, barely moving this is the result.
The last pic is after I cleaned it up with my $60 dewalt ROS. Quite a difference. Any thoughts on why this thing is sanding so bad. It is not operator error, I assure you. 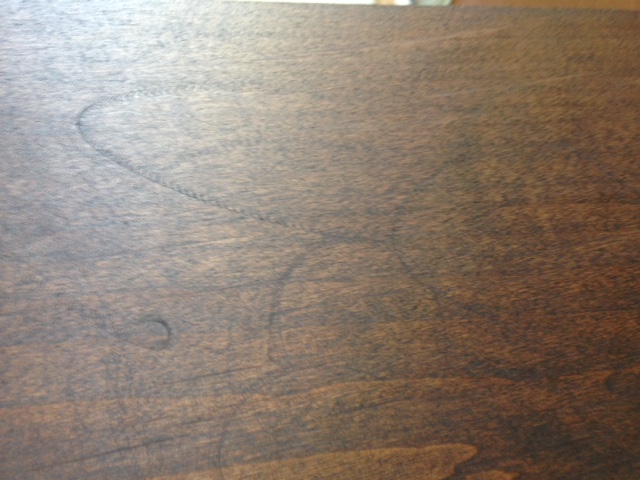 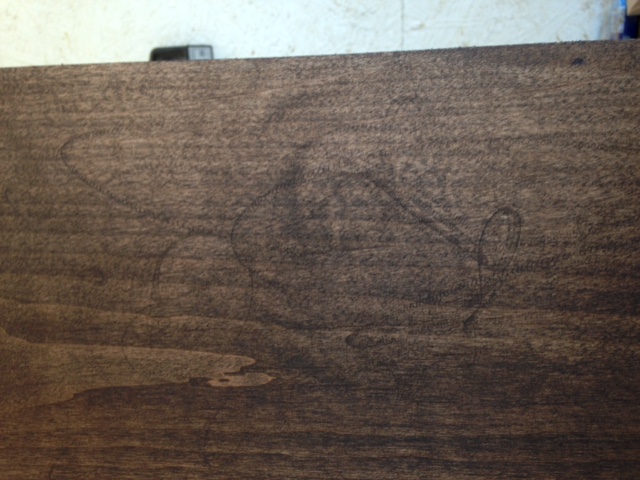 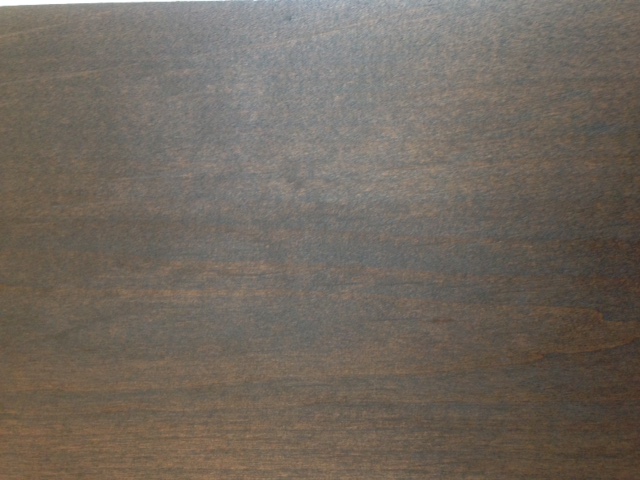 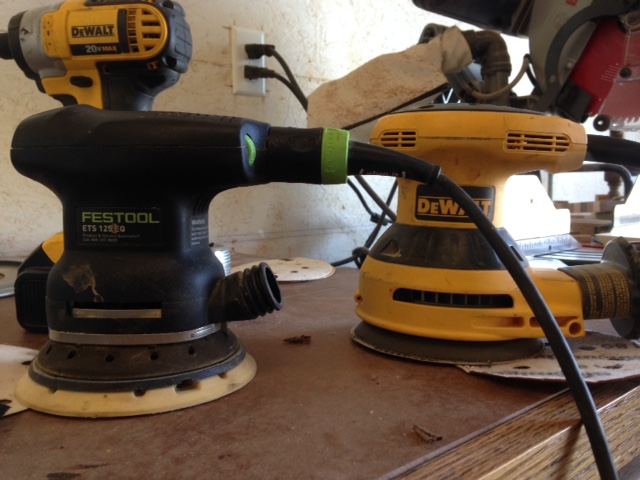 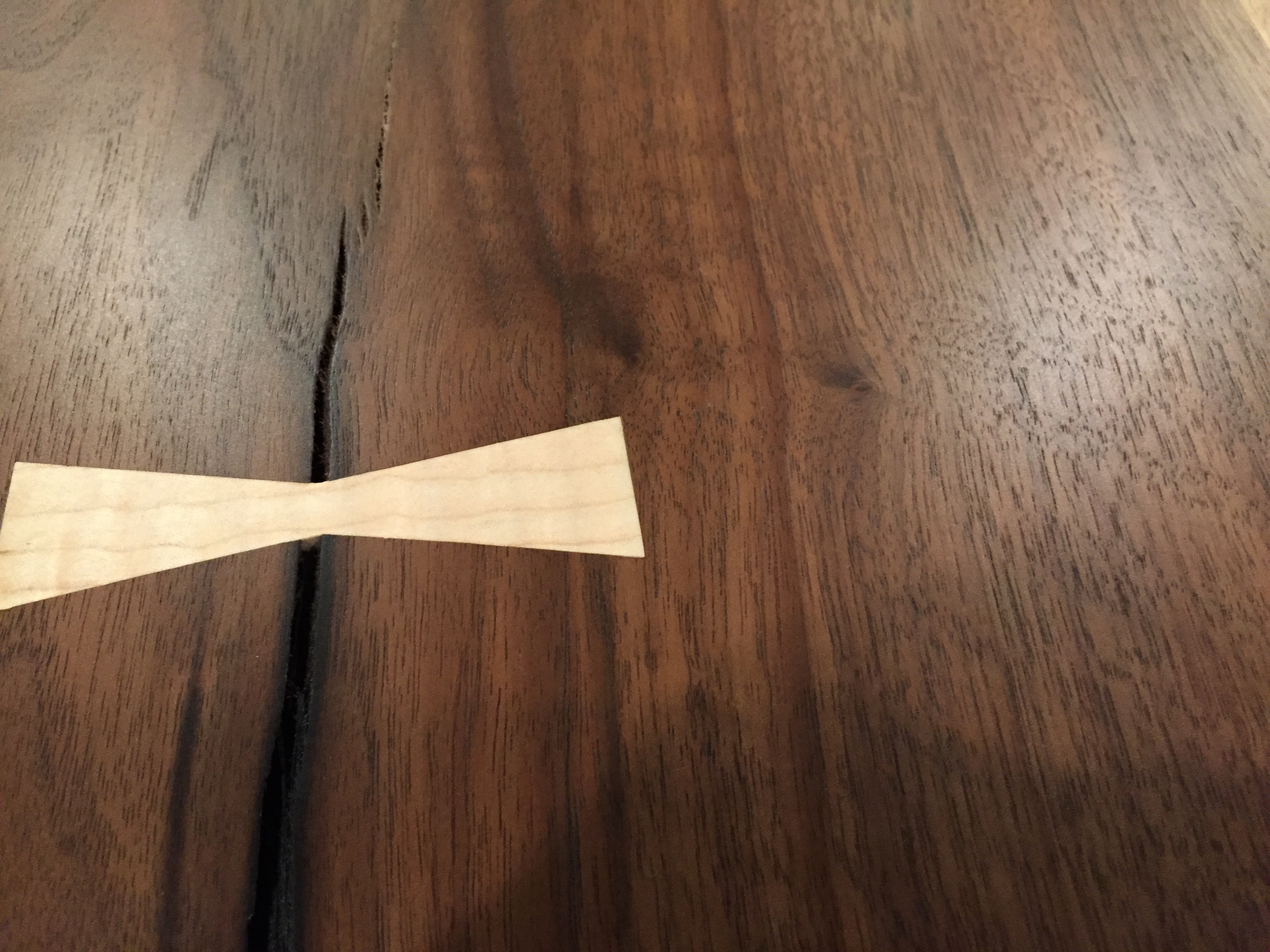 Looks like you have a woodchip between the backing pad and sandpaper. That mark is not directly sander related.

Nope Peter...this sander does this with any paper, any situation. Sanding pad is clean, unless there is something under the hook and loop pad which I don't see how that could be. It is a mystery to me.

Tell festertool you want your money back.

Side note, I picked up my 125 festool sander today and one of the screws holding the pad fell off. I went to put it back in and tighten the other screws only to find the threads in 3 of the 4 holes are completely stripped. Anyone else had this problem? 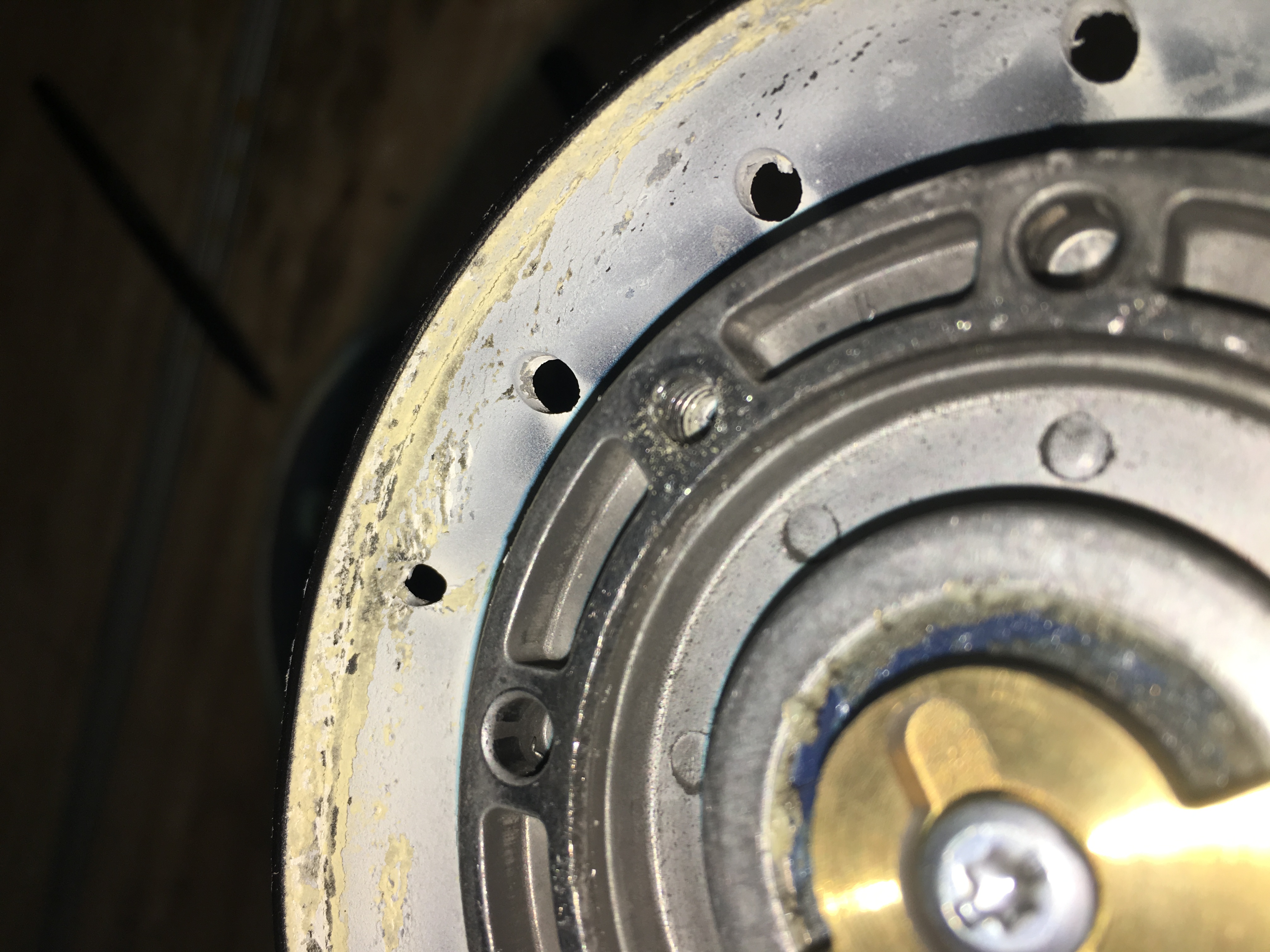 Another solution is our SurfPrep electric 5" random orbital with the on-board power supply and our new vacuum system. The vacuum should be on the website soon.

I just spent the last 3 days with this combo sanding wood and solid surface and it works wonderfully. The finish and power of our electric tool matches the air sanders, but the electricity consumption is 120 watts instead of 3750 for a 5 hp compressor. It has an outer runner motor that has more torque than our competitors standard motors.

We can run two or more sanders on our vacuum and it cannot be damaged by being plugged. Its being used by military contractors to collect dust from sanding equipment.

Our electric sander uses an outer runner DC motor that should yield higher torque per watt than our competitors. Our newest generation of electrics has on board DC conversion and it is one of the lightest and most comfortable sanders to use I've ever encountered.

Our film will compare to the Wurth film and we have all the standard hole patterns.

Adam...what i am talking about is a 5" disc that has probably over a 100 small holes in it. Works awesome on the Mirka Ceros with dust collection thru the pad. I have not found anyone else who offers this and i still did not see it on your site.

I believe that hole pattern is patented so I'm not sure we can duplicate it.

Ok Thanks. I dont mean to thread hijack here but...What are most guys using for the type of electric sanders that have a bunch of holes in the pad?...Like Abranet or a generic abranet? I had terrible luck with Abranet
Also do you guys sell Dynabrade Dynajet in line blow guns?

I think Bosch and Makita sanders work pretty well, with rounder surfaces too. In general, orbital sanders have been most useful and versatile in my experience. I've been working in a detailing crew for 2 years and Bosch GSS20-40 has been what we use, it's pretty great!